Big Papi is a Big Hit for the Jimmy Fund

The teenagers were already having the time of their lives, walking on the sacred Fenway Park grass and meeting Red Sox players, when the exhilaration suddenly reached a new level. There, emerging like a rock star from the dugout, was the biggest star in the Sox stratosphere – strolling right over to them with his familiar gait and electric grin: David Ortiz.

"Everyone got so excited, and we all rushed over to get his autograph," recalls Maddy Manganello, a recent high school graduate and Hodgkin’s lymphoma survivor who met Ortiz at last summer’s annual behind-the-scenes visit to Fenway by teens receiving treatment at Dana-Farber/Boston Children’s Cancer and Blood Disorders Center. "He took time to talk to or smile at everybody, and it made us all feel great. There is just something special about him."

The names of Ortiz and the late Ted Williams have often been linked as the two greatest home run hitters in Red Sox history. But there is another way in which these two great sluggers are bonded, one that involves the heart both men have displayed when it comes to helping others. 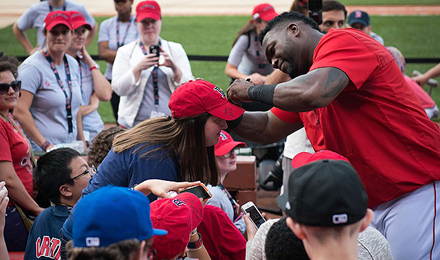 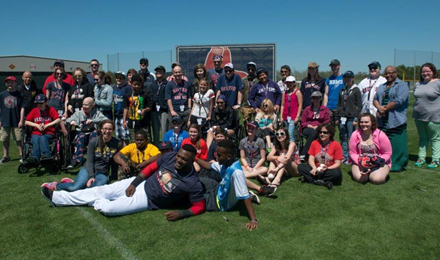 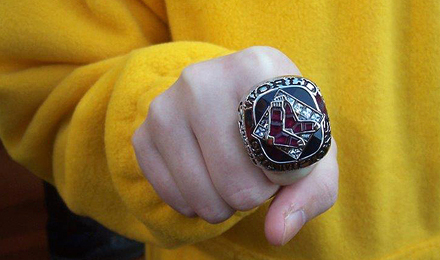 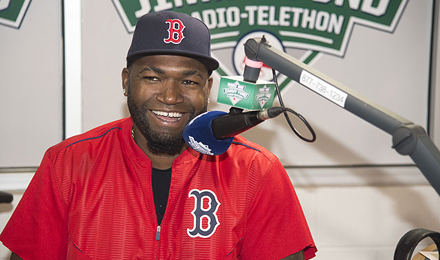 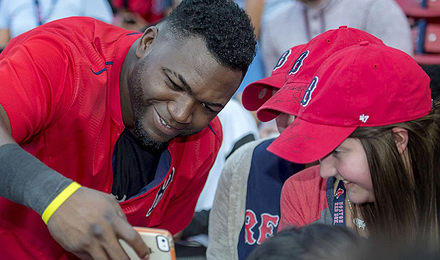 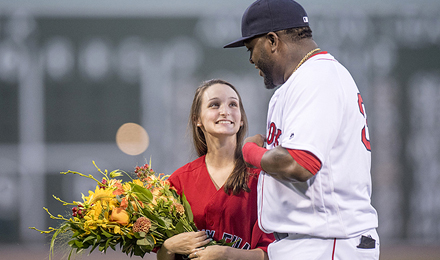 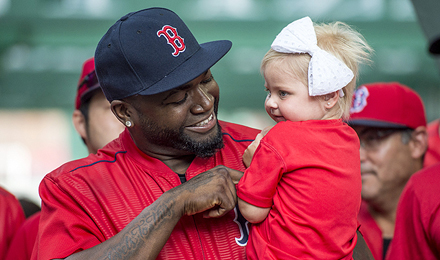 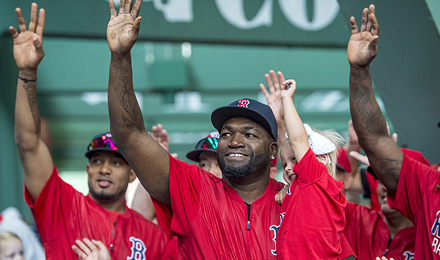 Like Williams in the 1950s, Ortiz has spent his playing career in Boston doing his part for Dana-Farber Cancer Institute – the world-renowned oncology center located less than a mile up Brookline Avenue from Fenway Park. Dana-Farber’s Jimmy Fund has been synonymous with the Red Sox for more than 60 years, and just as Williams was perhaps the charity’s most heralded celebrity supporter until his 2002 death, Ortiz has been a favorite of Dana-Farber patients and donors since coming to New England and the Sox less than a year later.

Manganello is just one of many cancer survivors of all ages who feel a special connection to Big Papi, whose clutch-hitting heroics have played a major role in the World Series championship trophies that have visited Dana-Farber’s pediatric and adult clinics after the 2004, 2007, and 2013 seasons. Having a team and superstar to cheer for provides a great diversion during treatment, and Ortiz’s charismatic, larger-than-life presence is especially uplifting.

Now, as he puts the final touches on a fantastic career, those whom Big Papi has inspired during the most challenging time in their lives are reflecting on what he’s meant to them.

"For me, David Ortiz has been the heart and soul of the Red Sox, and his spirit and determination to win the World Series helped give me the courage to get through treatment in 2004," says Marlene Nusbaum, a breast cancer survivor who now cheers on the Sox with her granddaughter. "Since then, as a Dana-Farber volunteer, I've watched as countless patients light up whenever Big Papi's name is invoked. His legacy of beating the odds will remain a beacon of hope and healing for generations to come."

The Roberto Clemente Award that Ortiz received in 2011, the MLB’s highest honor for "those who best represent the game of baseball through positive contributions on and off the field," is a testament to his charitable endeavors for a wide array of causes, both in the United States and in his native Dominican Republic. In these parts, however, where the Jimmy Fund is known as "New England’s favorite charity," the cancer connection is perhaps most special.

"When it comes to the Red Sox, kids will love any player who is kind to them, even if he is not a huge star," says Lisa Scherber, who as director of patient and family programs at Dana-Farber/Boston Children’s leads each year’s visits by pediatric cancer patients to Sox games at Fenway and (during spring training) in Florida. "In the case of Ortiz, he just has a way about him that makes everyone feel like he’s the only person in the room with them – he truly brings you into his world."

Everybody has their favorite Ortiz memories, and it is no different with Dana-Farber patients. For Nusbaum, who received care at Dana-Farber/Brigham and Women’s Cancer Center, it was his heroics for the curse-busters of ’04; for Molly O’Neill, treated for acute lymphocytic leukemia (commonly known as ALL) at Dana-Farber/Boston Children’s while in elementary and middle school, it was his franchise record 54-homer summer of 2006 and .370 postseason average for the ’07 champs that meant the most.

Molly had a ritual during this period of watching Red Sox games with her older brothers and parents while taking her nightly chemotherapy pills or other drugs. Later she was invited by the team to "deliver" the club’s World Series rings to Red Sox Principal Owner Tom Werner and Boston Mayor Thomas Menino when they arrived at Fenway on the morning of Opening Day, 2008. She even got to try on Big Papi’s ring before he did, and a few hours later watched with her parents from the stands as he received it during pre-game ceremonies.

Another young girl who formed a special feeling for Ortiz during her ALL treatment was Amber DaRosa, whose iconic photograph with Big Papi taken during August 2004 adorned Dana-Farber ads, banners, and billboards throughout that fall’s magical postseason and beyond. The image, taken in the Fenway stands, featured a boyish-looking Ortiz in uniform and 6-year-old Amber with her big smile, pink Red Sox shirt, and beautiful bald head. It was a powerful symbol of the Jimmy Fund-Red Sox relationship, and led to years of ribbing from her buddies.

"Every time David Ortiz does something great, my friends will be like, 'That's your boy,'" DaRosa, said a decade later, her cancer long in remission. "I don’t remember much about taking that picture, but people kept seeing it in different places. It's a fun part of my life."

Even Ortiz’s familiar voice has been a force for Dana-Farber. Each summer he is a featured guest on the WEEI/NESN Jimmy Fund Radio-Telethon presented by Arbella Insurance Foundation, which features compelling stories from Dana-Farber patients, doctors, researchers, nurses, celebrity guests, and athletes during the course of 36 hours and two Red Sox games at Fenway. Among the highlights of the 2016 event was when DaRosa and Ortiz were reunited on the field at Fenway Park.

"At Fenway Park and at the Jimmy Fund, David Ortiz invariably rises to the occasion," says Red Sox Hall of Famer and President & CEO Emeritus Larry Lucchino, who is also now Chairman of the Jimmy Fund. "He promises a child a home run and delivers. He pledges a donation to the radio-telethon and generously delivers. He embraces the leadership role, reminding us of Ted Williams and a host of legends who followed 'Big Papi' has as big a heart as any player with whom I have worked in nearly four decades in baseball."

In more recent years, as Ortiz has seemingly defied the aging process as a ballplayer, he’s continued to inspire. During the "Boston Strong" summer of 2013, Michael Johnston, a burly Navy veteran who had been shocked by a breast cancer diagnosis a few years earlier, was still worrying about a recurrence when he got a pleasant distraction by Ortiz’s playoff feats – from his series-changing grand slam against the Tigers in the ALCS through his World Series MVP heroics against the Cardinals.

"Just when it looked like the Red Sox were down and out, Ortiz put them right on his broad shoulders and brought them back," says Johnston. "He’s a reminder to anybody with cancer to never give up and keep pushing forward. It will be a very sad day when he's no longer out there."

Now, as Ortiz’s final season winds down – hopefully ending with more World Series highlights – Dana-Farber patients are getting a last look at their legend. For Jordan Leandre, who as a preschooler was diagnosed in April 2003 with a rare bone cancer the same week that Ortiz played his first regular season games for the Red Sox, it will be a bittersweet time.

Jordan remembers the phone calls Big Papi made to his father when he was going in for one of his many surgeries, and it was Ortiz who pushed the then-6-year-old boy’s wheelchair over to the microphone when he sang the National Anthem at Fenway on Opening Day of the 2006 season. A year later, when Jordan was able to run around the bases at Fenway during the ’07 radio-telethon, Ortiz was one of the Sox players cheering him on along with the crowd.

"It’s going to be real emotional for me when he plays his last game," says Leandre, now cancer-free and a high school baseball player. "I’ve always looked up to him, and I really never thought this day would come."

For his dad, Ken, Ortiz represents more than just a sports star for his son and other cancer patients. He is the real deal – like Ted Williams, an athlete who cares about those he reaches out to even when the cameras and microphones are nowhere in sight.