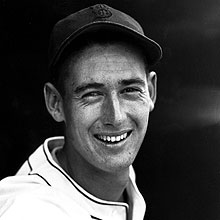 Ted Williams was a hero in the ballpark, on the battlefield, and in the hearts of millions of children suffering from cancer.

Famous for his extraordinary batting record during his decades-long career with the Red Sox, Ted also displayed heroism as a fighter pilot in two wars, and his tireless efforts on behalf of the Jimmy Fund.

Ted went everywhere to support the cause: American Legion banquets, temples and churches, Little League games, drive-in theaters, department stores for autograph sessions. Most memorably, he made countless visits to the bedsides of sick children at the Jimmy Fund Clinic.

As a kid, Ted dreamed of being a sports hero, but as an adult, he dreamed of beating cancer. His efforts over the years contributed to remarkable progress in the treatment of childhood cancers. 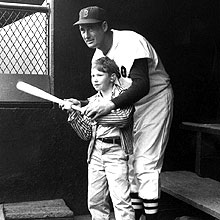 Ted Williams and a young patient

When Ted started working with the Jimmy Fund in the 1940s, almost every child with cancer died. Today, three out of four children with cancer survive.

"During his lifetime, Ted was uncomfortable when praised for all he did for the Jimmy Fund," says Edward J. Benz Jr., MD, President Emeritus. "But, let me say now that his commitment to the Jimmy Fund and to the children facing cancer should go in the record books as among the most any professional athlete has done to advance a cause."

"Ted signed on for life to the Jimmy Fund, helping make it the best-loved charity in New England," adds Mike Andrews, former Boston Red Sox second baseman and chairman of the Jimmy Fund. "Ted's name is synonymous with our battle against cancer."

His first visit, and hundreds of subsequent ones, went unheralded, because as Williams said, "What I do for the Jimmy Fund, I do for the kids."