Everybody loves a good joke – especially when it helps others.

This is why Jack Robinson wrote a joke book while undergoing bone cancer treatment at Dana-Farber/Boston Children's Cancer and Blood Disorders Center last year. Sales of his book "Make 'Em Laugh," compiled with the help of submissions from fellow pediatric patients in the Jimmy Fund Clinic, have exceeded his original goal. Based on his success, Jack will make a gift to the Jimmy Fund.

"I was hoping to sell 1,000 books, so this has been great," says Robinson, 13, an eighth grader at Milton Academy who says his book is aimed primarily at kids ages 5-12. "A lot of people pay for books and then tell me to send them to kids who need them, so we've already sent more than 750 books to cancer centers in 17 states plus the District of Columbia. We've still got a lot more places to try."

Robinson was inspired to write "Make 'Em Laugh" after another joke book his cousins gave him helped take his mind off his cancer. He put out a box in the clinic where patients could submit jokes and drawings, and then edited and organized them into chapters like "Sports Snickers," "Food Funnies," and "Animal Antics." It was a family effort; Jack's mother helped with the editing, his younger brother Grant designed a website, and his uncle Tony Will linked the site to a page on Amazon.com where books could be purchased. 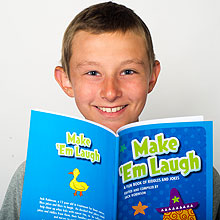 Although he has no immediate plans to write a sequel, Robinson has not ruled it out. In the meantime, he's had some new health challenges; a bone graft he received failed, requiring surgery and time in a wheelchair.

"He's had surgery in fifth, sixth, seventh, and eighth grades, plus a full year of chemotherapy," says Hughes. "We had hoped he'd have this year off, but the important thing is the recent news is that his cancer is gone."

And that's no laughing matter.