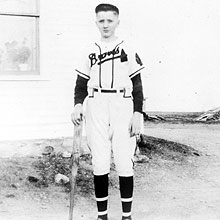 From his first radio broadcast that launched the Jimmy Fund in the late 1940s to his countless appearances at Jimmy Fund events, Einar Gustafson — the Jimmy Fund's original "Jimmy" — was an inspiration to hundreds of thousands of people throughout the country.

Jimmy's story began in 1948, when Gustafson was a 12-year-old patient of Dr. Sidney Farber, founder of Dana-Farber Cancer Institute and a father of modern chemotherapy.

During his treatment for cancer in the late 1940s, Jimmy longed for a television set so he could watch his favorite baseball team — the Boston Braves.

Dubbed "Jimmy" to protect his privacy, Gustafson was selected to speak on Ralph Edwards' national radio program, "Truth or Consequences," which was broadcast from the boy's hospital room on May 22, 1948.

During the broadcast, Edwards spoke to the young cancer patient from his Hollywood studio as Braves players crowded into Jimmy's hospital room. The show ended with a plea for listeners to send contributions so Jimmy could get his TV set. Not only did he get his wish, but more than $200,000 was collected and the Jimmy Fund was born.

Following his brush with celebrity and the remission of his cancer, Gustafson returned to his family's farm in northern Maine and later lived for many years in Massachusetts. Everyone at Dana-Farber assumed that the youngster had died because survival rates for pediatric cancers were so low during the era in which he was treated. While never intentionally concealing his role as "Jimmy," Gustafson remained anonymous until 1998, the 50th anniversary of the original radio broadcast.

After his "welcome back" to Dana-Farber, Gustafson went from public anonymity to near celebrity. His story was featured in People Magazine and Sports Illustrated, and in newspapers nationwide. In 1999, his home state of Maine held a Recognition Day for him and he was named honorary chairman of the Jimmy Fund. 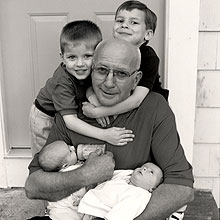 Sadly, Gustafson died of a stroke at age 65 on Jan. 21, 2001. But his memory continues to provide hope to adults and children with cancer, and inspiration to thousands of Jimmy Fund supporters.

"Einar's story—that he was cured at a time when so few were and that he led such a full life—is an inspiration to all of us," says Edward J. Benz Jr., MD, President Emeritus.

"His story is the story of our nation's war on cancer, and over the decades, hundreds of thousands of people have rallied against cancer in his name. We certainly pledge to continue that fight."