Cancer Research and Milestones of Dana-Farber 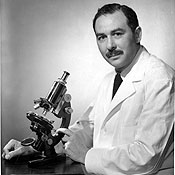 Dr. Farber and his team of clinicians and laboratory scientists are the first to use chemotherapy to attain temporary remissions of acute lymphocytic leukemia in children. Research that transfers new scientific knowledge " from the lab bench to the patient bedside" forms the foundation for future progress against cancer at the Institute.

Dr. Farber and colleagues achieve the first remissions in Wilms' tumor of the kidney, a common form of childhood cancer. By employing the antibiotic actinomycin D in addition to surgery and radiation therapy, they boost cure rates from 40 to 85 percent. 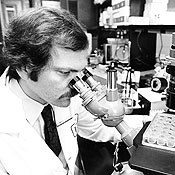 Studies involving pediatric and adult patients continue to demonstrate the effectiveness of using multiple drugs to cure many forms of cancer. Foundation leaders help to pioneer this strategy, known as combination chemotherapy.

Researchers increase the cure rate for a bone cancer known as osteogenic sarcoma from less than 15 percent to more than 60 percent. Use of chemotherapy in addition to surgery and/or radiation therapy reduces many tumors to operable size and may even render surgery unnecessary.

Having developed monoclonal antibodies to purge cancer cells from bone marrow, physician-researchers pioneer autologous ("self") bone marrow transplantation as a treatment for childhood leukemia. This procedure enables patients to tolerate extremely high doses of chemotherapy and radiation formulated to eradicate their disease.

Half of patients with head and neck cancers with a poor prognosis prove responsive to an aggressive program of chemotherapy, radiation and/or surgery developed by Institute researchers and their collaborators.

As of the late 1980s, two of every three children who enter the Jimmy Fund Clinic walk out cured, and more than half of all people with cancer are cured.

Dana-Farber researchers are among the first to suspect a relationship between the retrovirus that causes human T cell leukemia (HTLV) and the one that causes AIDS (HIV).

The multidisciplinary Brain Tumor Clinic is established in 1989 to accelerate progress against brain cancers in children and adults. 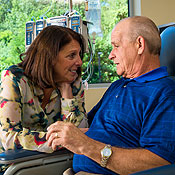 The Cancer Risk and Prevention Clinic is created in 1992 to advance the early detection and prevention of breast cancer in women at high risk for the disease.

In 1993, the Women's Cancers Program, now known as the Susan F. Smith Center for Women's Cancers, is launched at Dana-Farber. This initiative aims to reduce the incidence of cancers of the breast, lung and gynecological and reproductive systems by bridging the gap between petri dish and patient.

Scientists discover a group of genes that raise susceptibility to a common inherited form of colon cancer and several other malignancies. The finding reveals an entirely new mechanism for cancer's development. It also raises hopes for saving thousands of lives by screening individuals at high risk for the disease.

Dana-Farber opens the Zakim Center for Integrative Therapies, making complementary therapies such as acupuncture, massage, and meditation available to patients while conducting formal research into such therapies' effectiveness.

Dana-Farber researchers and colleagues at affiliated hospitals announce the results of the first human study of Endostatin Protein, a drug that seeks to reduce tumors by cutting off their blood supply. The investigators report that the drug is safe even in high doses and that in some cases it halted the progress of advanced cancers.

Dana-Farber researchers find that Gleevec®, a targeted therapy that achieved striking success against chronic myelogenous leukemia, can shrink and even eliminate tumors in some patients with a rare and otherwise incurable digestive-tract cancer called gastrointestinal stromal tumor.

Aiming to overcome some of the longstanding barriers to the creation of new cancer therapies, Dana-Farber opens the Center for Applied Cancer Science. By working closely with scientists in the biotech and pharmaceutical industries, the center hopes to speed the process by which research advances are converted into clinic-ready treatments.

Picking up where the map of the human genome leaves off, a group of Dana-Farber scientists opens the Center for Cancer Systems Biology, which studies how genes act together in controlling the lives of cells. By tracking such activity networks, researchers hope to understand how genes work in concert, and how they are disrupted in cancer cells.

The Institute inaugurates the Patient Navigators program to help patients from underserved populations receive care and support at the Dana-Farber/Brigham and Women's Cancer Center.

Research in the laboratory and in animal models by investigators at Dana-Farber and Novartis Pharma AG identifies a compound that is 20 times more potent than the much-heralded drug Gleevec against chronic myelogenous leukemia (CML). If effective in human patients, the compound, called AMN107, may produce longer remissions than Gleevec and be active in patients who have relapsed after taking Gleevec.

An international team led by researchers at Dana-Farber and the Broad Institute of M.I.T. and Harvard produces a comprehensive map of the "molecular landscape" of lung cancer, identifying 50 sites on the chromosomes of lung cancer patients that are genetically different from those in healthy individuals. About two thirds of these sites harbor genes that hadn't previously been suspected as playing a role in the disease.

Dana-Farber scientists achieve a medical first: using a "targeted" drug to drive a patient's metastatic melanoma into remission. When lab tests showed the patient's tumor cells harbored a certain mutated gene, doctors treated her with a drug that blocks the gene's action. The result: a dramatic reduction in tumor size and activity.

Dana-Farber researchers engineer lab-grown mouse and human cells to produce brown fat, a natural energy-burning type of fat that counteracts obesity. Use of the technique in people could provide a new approach to treating obesity and diabetes.

A scientific team led by Dana-Farber researchers identifies a group of normal human antibodies that neutralize the vast majority of flu viruses known to cause disease in people. Copying these natural proteins to produce vast numbers of identical, "monoclonal" antibodies could give doctors and public health officials a powerful new weapon against virus transmission and flu outbreaks.

Scientists at Dana-Farber and the Broad Institute launch Project Achilles, an effort to determine which of the many gene mutations in cancer cells actually drive the cancer process.

Profile is launched, a research project launched by scientists at Dana-Farber Cancer Institute and Brigham and Women's Hospital. It is one of the nation's most comprehensive personalized cancer medicine initiatives. Profile aims to detect genetic alterations in tumors and potentially identify targeted therapies that are most likely to be effective in individual patients. The databases of tumor genetic profiling data derived from a very large number of patients, and linked to clinical information, make Profile a powerful tool for discovery and precision medicine. This database, which adheres to emerging IT standards, also supports proposals for new research studies and cancer clinical trials.

Challenging a half-century-old theory that chemotherapy works by targeting fast-dividing cells, Dana-Farber researchers report that chemotherapy agents are most effective against tumors that are already primed for death. The researchers find that cancer cells on the verge of self-destructing are especially vulnerable to chemotherapy — a discovery that may make it possible to predict which cancer patients are most likely to benefit from certain chemo agents.

Collaborating scientists at Dana-Farber and Boston Children's Hospital report that a combination of two drugs may alleviate radiation sickness in people who have been exposed to high levels of radiation, even if the therapy is given a day after exposure occurred. The finding suggests that the two-drug regimen could become a mainstay of the public health response to events such as a nuclear power plant accident or a nuclear terror attack. 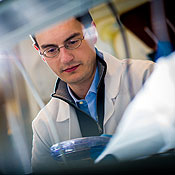 Dana-Farber scientists discover a type of fat cell, known as "beige fat," in mice. Such cells can, under certain conditions, burn energy to make heat. Researchers suggest that further study of beige fat might lead to new treatments for obesity. Obesity is a risk factor for cancer.

A compound developed by Dana-Farber researchers to block a cancer-causing gene shows promise in animal tests at Baylor College of Medicine as a potential male contraceptive.

Researchers identify three subtypes of high-grade serous ovarian cancer – the most common cancer of the ovary – based on the extent of a particular kind of genetic damage with the cells. Patients with the highest degree of such damage generally have the best response to standard chemotherapy, the investigators find.

Scientists at Dana-Farber and the Broad Institute provide the most detailed look yet at how genetic mutations within chronic lymphocytic leukemia cells (CLL) can shift over time. The changes help explain why CLL often recurs after treatment and may provide a road map to the development of better therapies for the disease.

Although women who survive childhood cancer face an increased risk of infertility, Dana-Farber researchers find that nearly two-thirds of those who tried unsuccessfully to become pregnant for at least a year eventually conceived — comparable to the rate of eventual pregnancy for all clinically infertile women.

The Institute receives a $30 million gift from Albert A. Marcotte, PhD, which helps expand research and clinical facilities, and creates the Marcotte Center for Cancer Research at Dana-Farber.

The Institute announces two initiatives to expand its network of clinical care facilities in the region. The first is a partnership in which Dana-Farber will provide hematology and medical oncology care services at Steward St. Elizabeth’s Medical Center in Brighton. The second is the acquisition of Commonwealth Hematology-Oncology (CHO), the largest community-based cancer care program in New England, with eight sites in Eastern Massachusetts. With the purchase, CHO is renamed Dana-Farber Community Cancer Care.

A new laboratory test predicts which of several cancer drugs will work best against a patient's tumor, and could become a powerful precision medicine tool for individualizing cancer therapy.

New research by Dana-Farber Cancer Institute scientists raises the prospect of cancer therapy that works by converting a tumor's best friends in the immune system into its gravest enemies.