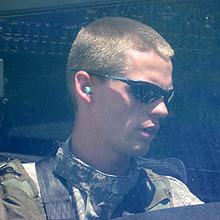 New Year’s Eve 2010. In a military hospital in Hawaii with much of the staff away for the holidays, Army pilot Ben Groen learned he’d been diagnosed with T cell lymphoblastic non-Hodgkin lymphoma, a rare, aggressive cancer of the white blood cells and lymph nodes. His doctor told him that his treatment – which would need to begin almost immediately and require months of hospitalization – would exceed the capacity of the base’s blood bank.

On January 2, Groen and his two young children were on a plane for Boston. His parents picked the kids up at the airport and Groen went directly to Brigham and Women’s.

For someone who was 24 years old and had survived the rigors of Army boot camp and flight training, the diagnosis of cancer was, Groen says, "a huge shock. When they told me I had cancer, I said, 'From what?' I thought only older people got cancer."

As an Army captain and pilot of Black Hawk helicopters, Groen was trained to handle dangerous situations: cancer was an enemy with an unexpected face. "As the Army sees it, danger is a risk that has to be mitigated," he relates. "That’s how I approached my treatment. Life is dangerous, war is dangerous, cancer is dangerous. You’ve got to find a way around it."

Groen’s youth and stamina led doctors to prescribe a particularly intense form of therapy, normally reserved for children and adolescents with the disease. Though likely to be grueling, the protocol would improve his chances of survival to more than 85 percent, according to his oncologist, David Steensma, MD.

“Due to his physical training, Ben was about as physically fit as you can possibly be,” Steensma continues. “He has also had fantastic support from his family. He often brings his wife and children to the clinic when he’s getting a treatment, and it has been a real joy for our staff to see the little ones’ energy and follow their progress as they get bigger. But this treatment is still a hard road. Ben has had an incredibly positive attitude throughout and has approached his entire treatment without complaining – just like you’d expect from a good soldier, and from a mentally and physically strong young man.”

The first five months of chemotherapy treatment were, Groen admits, “tough,” but not quite as difficult as he’d been led to expect. “There were periods of physical pain, discomfort, and nausea, but fewer than I thought there’d be - not every day. I braced myself for a really bad time, but it never really came.”

After tapering off from the cycles of intense chemotherapy, Groen bounced back quickly as his disease went into complete remission. He’s back on active duty, working as an assistant professor of Military Science at the University of New Hampshire. His goal is to return to flying Black Hawks. Steensma feels he’ll be ready as soon as his treatments finish.“

As much as I love working at UNH, it doesn’t compare with flying – pulling up infantrymen and dropping them off where they need to be,” he remarks. He hopes to join the flight unit at either Fort Bragg, in North Carolina, or Fort Campbell, in Kentucky after mandatory retraining.