The Jimmy Fund is rich in history. Hear and see some of the iconic Jimmy Fund moments. 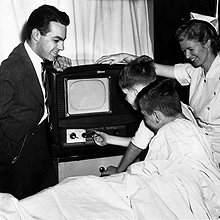 "Jimmy" enjoys a new television purchased for him (to watch baseball games) through an early Jimmy Fund fundraising drive.

During his treatment for cancer in the late 1940s, "Jimmy" longed for a television set so he could watch his favorite baseball team, the Boston Braves.

His wish was granted after Ralph Edwards interviewed him on the national "Truth or Consequences" radio program.

During the broadcast, Edwards spoke to the pediatric cancer patient from his Hollywood studio as Braves players crowded into Jimmy's hospital room.

The show ended with a plea for listeners to send contributions so Jimmy could get his TV set.

Not only did he get his wish, but more than $200,000 was collected and the Jimmy Fund was born.

The Jimmy Fund/Variety Children's Charity Theatre Collections celebrated its 60th anniversary in 2009 with the short film, Stronger than Ever. The trailer chronicles the journey of Dan Pardi, a pediatric cancer survivor, as he returns to Dana-Farber 14 years after being treated here for leukemia.

The film is based on Strong As Iron, an earlier trailer described below, that featured a young Pardi and other Jimmy Fund Clinic patients and their relationship with iron workers who were constructing a Dana-Farber research building across the street.

They got to know each other through signs and smiles across Jimmy Fund Way. The men and women of Boston Iron Workers Union Local 7 were building the Richard A. and Susan F. Smith Research Laboratories at Dana-Farber Cancer Institute and the children were waiting in the Jimmy Fund Clinic playroom for their cancer treatments.

The silent yet powerful connection between the youngsters and the ironworkers is the subject of an award-winning trailer for the Jimmy Fund's Movie Theatre Collections. Based on a true story and featuring the actual Jimmy Fund Clinic patients and ironworkers who were on the job in 1996, the film short is part of a 50-year tradition that helped launch the Jimmy Fund and that continues to support cancer research at Dana-Farber today.