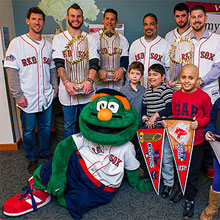 Three World Series trophies shared space with crayons and juice boxes as the Boston Red Sox surprised pediatric patients and families during a morning visit to the Jimmy Fund Clinic.

The visit, part of the team's 2013 Holiday Trophy Caravan, included stops to the clinic’s private infusion rooms and playrooms on Dana 3 and Yawkey 5. Players, coaches, and team mascot Wally the Green Monster autographed and handed out World Series pennants, and joined families for photos with the 2004, ’07, and ’13 championship trophies.

"This is our Christmas card, right here," one mother said as she napped a shot of her son beaming from his infusion bed, flanked by trophies and players. “I have some friends in New York I'm going to send his to," she added with a laugh.

"It's so cool," said one 9-year-old girl who was in for a checkup, accompanied by her mother. "We just looked up and there they were." Added her mom: "They always have a nice surprise for the kids here. It means so much."

Dana-Farber has been an early stop on trophy visits each of the three times the Red Sox have won the World Series during the past decade, continuing the team’s unique 60-year relationship with DFCI and the Jimmy Fund.

"It's always great to see the looks on the kids' faces, and it's great for us to be able to give back like this," said pitcher Drake Britton. Bullpen coach Dana LeVangie said that as soon as young players like Britton are drafted by the Red Sox, they learn about the Jimmy Fund. "It's an honor to be able to come here," said LeVangie. "Especially with kids of my own at home, it brings you back to what's really important."