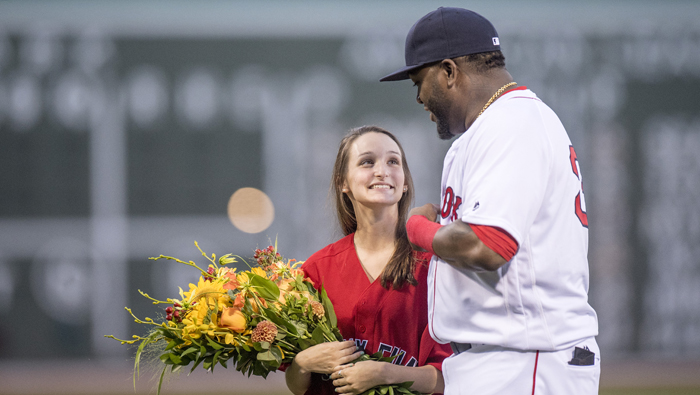 Amber DaRosa and Red Sox slugger David Ortiz reunited after 12 years as 38,000 fans looked on at Fenway Park– and healthy, college-bound DaRosa threw a strike to her hero during the ceremonial first pitch. Photo courtesy of The Boston Red Sox

The 15th annual WEEI/NESN Jimmy Fund Radio-Telethon presented by Arbella Insurance Foundation on August 29 – 30 has already raised more than $3.5 million for research and patient care at Dana-Farber, and donors can still make gifts through September 30. In addition to the many interviews with doctors, researchers, nurses, and other staff, these are a sampling of some of the powerful stories featured during the 36-hour broadcast:

Carol Chaoui: Chaoui, a long-time marathon runner, learned she had stage III invasive breast cancer in 2009. Five years later to the day, she was told she also had stage III thyroid cancer. Even after a third diagnosis, this time for metastatic breast cancer that spread to her skull and spine, she still ran the 2016 Boston Marathon® for Dana-Farber. "You have to accept that whatever you do, cancer can still come back," she says. "I'm just living each day with great hope that through funding for research, they are going to keep me alive to see my grandkids."

Liz Cirillo and Lisa Cleary:  Cirillo and Cleary met in a hallway at Boston Children’s Hospital, and learned that their young sons Marco and Nick had the same diagnosis – stage IV high-risk neuroblastoma. As the boys have continued their treatment at Dana-Farber and Boston Children’s, their moms have grown close. "She’s my other half at this point," says Cleary; adds Cirillo, "I feel like we were able to just jump off and start a support system for each other."

Amber DaRosa:  When DaRosa was a 6-year-old Dana-Farber patient in the summer of 2004, a photo of her and Red Sox slugger David Ortiz was plastered on lampposts and billboards throughout Boston as the Red Sox marched to the World Series title. This summer, at the Radio-Telethon, the pair reunited after 12 years as 38,000 fans looked on at Fenway Park – and healthy, college-bound DaRosa threw a strike to her hero during the ceremonial first pitch.

Liz Hoenshell:  While sharing the story of how her daughter, Kristen, was diagnosed at nine months old with rhabdomyosarcoma – and how her husband, Frank, also a Dana-Farber patient, died of cancer at 47 –  Hoenshell received a surprise on-air phone call from New England Patriots quarterback, Tom Brady. Kristen, now 9 and doing well, got to say "hi" to Brady, who praised her and her mom for their courage.

Carter Mock:  Diagnosed with an osteosarcoma in his left leg in September 2015, Carter Mock, 7, met a teenage patient – Jack Manning – who had returned to sports after the same cancer in his leg through an emerging surgery known as rotationplasty. Encouraged by Jack’s success, Carter’s family decided to also try the procedure. "Seeing Jack was seeing our future," says Carter’s mother.

Rob Nutter:  While training to be a golf pro in Florida last fall, Maine native Nutter, 26, was diagnosed with acute myeloid leukemia. His family wanted Rob to be treated at Dana-Farber, and the Florida golf club where he was training paid to have him air-flighted to Boston. Now, after 18 months of treatment including a stem cell transplant, he’s back to playing – and teaching – the game he loves.

Beverly Sotir:  Sotir’s lung cancer was first noticed by her daughter, an emergency room physician, when another doctor was examining Beverly’s X-rays for pneumonia. Ten years later, the mother of eight and grandmother of 16 says that "I’m alive because of Dana-Farber. They’ve got the latest, greatest experiments – and they know what to do."