Why the Pan-Mass Challenge is my kinetic karma 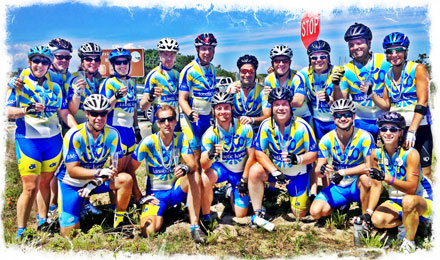 I rode in my first Pan-Mass Challenge (PMC) the day after my mother died. She was a two-time breast cancer survivor who developed an unrelated, rare ocular melanoma while I was training. She passed away in the early morning of August 2, 2002, as I sat by and held her hand. After feeling her heart beat its last, I picked up my bike and headed out to the Wellesley starting line.

Getting through that first PMC was much easier than I expected. I was alone, I was grieving, but once I got on the road people were very welcoming. I knew a lot of other riders had been through similar experiences, and there was a general joy to the event that was a bit contagious. During a very solitary, thoughtful time, I felt as though I was surrounded by friendly, supportive people.

Very soon, probably that day, I decided to form my own PMC team – Team Kinetic Karma. We had eight members in 2003 and this year will have around 40.

The rides have continued to get more personal for me. In 2012 my sister, Debbie, was treated for colon cancer, and in November 2013 I found a lump in my neck and was diagnosed with stage III oropharyngeal (throat) cancer. That winter, I went through two surgeries and two months of daily radiation at Dana-Farber/Brigham and Women’s Cancer Center, but continued arranging Team Kinetic Karma’s weekly Sunday training rides. 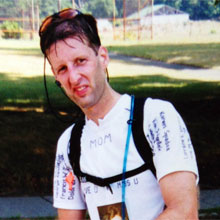 During my treatment, I decided to surprise the team and show up one Sunday. I had lost 30 pounds and was very weak, but I brought my bike – figuring I would ride to the first hill and then wave goodbye. Well, that turned into a mile, then two miles, and before I knew it I rode all 28.

I still wasn’t sure if I could do the actual PMC, but I got my first clean scan in June 2014 and in August I made it to the starting line for the 13th time. It rained nearly the whole two days and 192 miles, but I finished. Today I’m cancer free and feeling great. I have checkups every few months and am getting ready for another PMC on August 1 – 2. The doctors say if I stay clean four more years, I’ll be considered cured.

People always ask how I came up with our team name. I had started studying Buddhist philosophy in the months after my mom died, and a lot of it resonated with me. Karma is a Buddhist term that means you get back from life what you put into it. As an engineer, I know if something has kinetic energy, it is in motion — like a speeding bullet or a rock falling off a cliff. Therefore, Kinetic Karma is all about keeping good deeds in motion. If one does a good deed, it ripples through the universe, like a pebble causes ripples in a pond.

If each of us is kinetic on our bikes, we will cause those ripples of positivity to multiply.