What African-American men need to know about prostate cancer 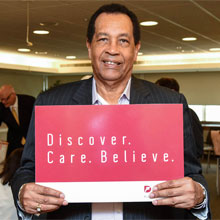 For the last dozen years, Tom Farrington has been sounding the alarm about the disproportionately high risk of prostate cancer facing black men, and his message remains the same: Knowledge is your best weapon in this fight.

“You must be on guard – learn prostate health and have PSA (prostate specific antigen) testing and a digital rectal exam beginning at age 40,” says Farrington, a survivor of the disease who founded the Prostate Health Education Network (PHEN) in 2003. “Our mission is to advise every black man that he is at high risk for prostate cancer.” This is critical, because prostate cancer is highly treatable when it is detected early.

It’s also important to know if you have a history of prostate cancer in your immediately family, because this increases your risk significantly.

Attention to lifestyle factors can help prevent prostate cancer, research shows. Recommendations include maintaining a healthy weight through diet and exercise; limit intake of red meat and eat more fish; incorporate tomatoes cooked with olive oil into your menus; avoid smoking, and drink alcohol in moderation. The debate about PSA screening continues. In 2012 the U.S. Preventive Services Task Force (USPSTF) recommended against routine PSA testing for men without symptoms. Its argument was that only a small number of men have avoided dying because of screening. And the test often produces false-positive results that can lead to unneeded biopsies and treatment that can have life-altering side effects.

For African-Americans, Farrington disagrees because of their increased risk for developing prostate cancer. "Tell your doctor you want the PSA test," Farrington urges. Despite the USPSTF guideline against routine screening, the cancer society and the National Comprehensive Cancer Network (NCCN) recommend that men discuss the risks and benefits with their physician. And Dana-Farber specialists have also disputed the recommendation.

PSA testing policy will be a hot topic at the 11th Annual African-American Prostate Cancer Disparity Summit sponsored by PHEN and scheduled for September 17 and 18 in Washington, DC.

PHEN says that the USPSTF’s recommendation against routine testing "is changing prostate cancer healthcare policies and practices without proper consideration for Black men or others at high risk of the disease.""