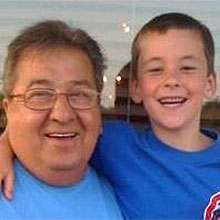 Griffin Lincoln and his grandfather, Joe

Many people spend the days after Halloween trying to shed weight from excess candy, but Griffin Lincoln seeks all the pounds he can – with good reason.

For the fifth year, the Canton, Mass., teenager collected leftover Halloween goodies and gave them to Dana-Farber for distribution throughout the year at its Ruth and Carl J. Shapiro Center for Patients and Families and the Eleanor and Maxwell Blum Patient and Family Resource Center. Before Halloween, he hoped to donate 700 pounds of sweet stuff, and if past hauls are any indication, it’s an attainable goal.

Lincoln, an admitted candy lover, sacrifices his loot and encourages others to do the same in homage to his grandfather, Joe Molinari. He shared Lincoln’s sweet tooth, and would return from his cancer treatment at Dana-Farber with Jolly Ranchers and mini Hershey bars for his grandson. Sometimes Griffin would go along with him and his mother, Susan Molinari, and they would raid the candy dishes together.

Then, right after Halloween in 2010, Joe Molinari donated two large trash bags of his excess candy to the Shapiro and Blum centers as a thank you for his care. Although he died five months later, his gesture made a long-lasting impact on 9-year-old Griffin.

"The Halloween after my grandfather died was my first time trick-or-treating with a pillowcase instead of a plastic pumpkin, and I had a lot of leftover candy the next day," says Lincoln, now 13. "So I suggested to my mom that we bring the extra to Dana-Farber to repay them for all the candy my grandfather brought me." 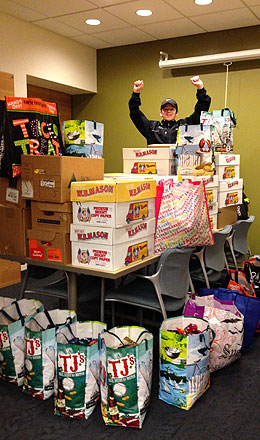 Griffin with over 1,027 pounds of candy for Dana-Farber patients

Things grew quickly from there. Lincoln told a friend at JFK Elementary School in Canton about his plan, and she offered to donate her extra candy, too. The principal said they could ask other kids, and soon kindergartners were coming up to Lincoln with pieces of candy in their hands. "This is for the patients," they’d tell him.

Dana-Farber got 181 pounds of candy that first year, 2011. The total amazed and motivated Lincoln. If he could get his own school to generate that much, he wondered, what if he got others involved too?

"I just ask more and more people each year to donate," he says. "People really want to help, but sometimes they just need to be asked."

When Lincoln moved up to Galvin Middle School, where he is now an eighth-grader, the candy crusade continued. JFK Elementary has continued collecting, and after its principal moved to a new school, he started an additional branch. Susan Molinari gets donations from her gym, and people in town purposely buy extra candy so they can give more. The family now places a bin on the front steps of their house for drop-offs.

"Some people ring the bell if they think we’re home because they like to meet Griffin and thank him for doing the collection," says Susan Molinari. "It seems like everybody knows someone affected by cancer or who has been treated at Dana-Farber."

"Griffin has made a huge difference to so many by doing this," adds Patricia Stahl, M.Ed, manager of volunteer services and programs at Dana-Farber. "People stop in to get a sweet pick-me-up, and often comment on how it brightens their day."

Lincoln jokes that eating less of the candy himself helps keep his totals rising, but he’s serious when he talks about the pride he has in continuing his grandfather’s legacy. Susan Molinari agrees. "The candy collection is something my dad would have done himself," she says. "He loved giving people treats and making them smile."

Griffin not only met his 2015 goal, he exceeded it – by far. He donated over 1,027 pounds of candy to brighten the days of Dana-Farber patients. In the past five years, Griffin has donated more than 3,000 pounds of candy.