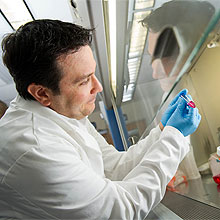 Alec Kimmelman, MD, PhD, whose research focuses on the pathogenesis of pancreatic adenocarcinoma

The challenge with pancreatic cancer has always been to catch it early. Because of its subtle, variable symptoms, the disease often isn’t diagnosed until an advanced stage, when it is particularly difficult to treat.

Researchers are investigating not only how to detect the disease earlier but also how to better understand its causes and develop more effective treatments.

Pancreatic cancer arises in a series of steps that occur over a number of years. At the earliest stages, pancreas cells begin to acquire mutations or other abnormalities in a small number of genes. As abnormalities arise in additional genes, the cells of the pancreas begin to look abnormal. One of the most common genes to be affected is KRAS, which regulates cell growth. Researchers are developing new diagnostic tests that can detect this change using fluid extracted from the pancreas, although such tests aren’t yet ready for general use.

In recent research, scientists at Dana-Farber and other institutions recently found that an upsurge in certain amino acids often occurs before pancreatic cancer is diagnosed and symptoms appear. Although the increase isn’t large enough to be the basis of an early-detection test, the discovery will help researchers better understand how pancreatic cancer affects the rest of the body, particularly how it can trigger the sometimes deadly muscle-wasting disease known as cachexia.

Efforts to improve the treatment of pancreatic cancer include the development of new surgical and radiation therapy techniques, new combinations of chemotherapy drugs, targeted therapies, and therapies that harness the immune system to attack the disease.

In the surgical field, investigators are exploring whether laparoscopic procedures – which involve inserting surgical instruments through small cuts in the abdomen – to remove cancerous pancreatic tissue are as effective as traditional, large-incision techniques and whether they improve the recovery process. Some studies are also examining whether delivering a large dose of radiation therapy to the pancreas during surgery is beneficial.

Clinical trials are testing new combinations of chemotherapy drugs for pancreatic cancer. One such combination, of the drugs gemcitabine, irinotecan, and the arthritis drug celecoxib has shown promise. Separately, Dana-Farber investigators recently reported that they have shrunk or slowed the growth of notoriously hard-to-treat pancreatic tumors in pre-clinical models with a drug routinely prescribed for malaria and rheumatoid arthritis. The finding prompted the opening of a small clinical trial for patients with advanced pancreatic cancer.

Scientists are also developing new forms of chemotherapy agents. The U.S. Food and Drug Administration recently approved Onivyde – a nanotherapeutic version of the chemotherapy drug irinotecan – as part of a treatment for patients with advanced pancreatic cancer that has progressed despite treatment with the chemotherapy agent gemcitabine. Nanotherapies for cancer consist of an anticancer agent and a nanosized carrier that transports the agent directly to a tumor and increases the length of time the agent is active in the body.

Scientists have begun to develop targeted therapies that take aim at the molecular vulnerabilities of pancreatic cancer cells. One of these, erlotinib, has already been approved, in combination with gemcitabine, for use in patients with pancreatic cancer. Drugs such as hyaluronidase that attack the mesh of tissue around pancreatic tumors – potentially increasing the effectiveness of chemotherapy agents – are now being tested in clinical trials.

A recent discovery by Dana-Farber scientists may lead to a new type of targeted therapy against the disease. They found that pancreatic cancer cells’ growth and spread are fueled by an unusual metabolic pathway that potentially could be blocked with drugs to control the cancer.