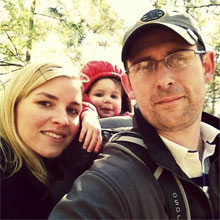 Andrew and Emily enjoy a hike with their son, Laughton

During a year in which both his wife and mother battled cancer, Andrew Macrae often felt as if he were summiting a mountain. Now, to honor their journey and support Dana-Farber, Macrae is scaling the 29,029 feet needed to reach the peak of the world’s tallest mountain – Mount Everest – without nearing the Himalayas.

Starting today, Macrae will hike to the top of Mount Washington in North Conway, New Hampshire, six times in six days, an endurance test totaling the height of Mount Everest.

A Scottish-born fifth-grade teacher at the British International School of Boston, he hatched the idea for his Hike the Height of Everest project this spring, shortly after his wife, Emily, finished treatment for Hodgkin lymphoma at Dana-Farber, and his mother, Carol, died from lymphoma in Scotland.

"I wanted to do something physically hard that would give me a small idea of what Emily and my mother went through, but also something different that would attract more fundraising,” explains Macrae. “Many people walk or run for Dana-Farber. I figured, why not climb? Everest isn’t here, but this is the next-best thing close to home.”

Colleagues and student families at Macrae’s school were deeply touched when they learned of his idea in June. Caring for Emily (also a teacher) during her treatment, along with their 2-year-old son, Laughton, left Macrae little time for regular exercise during the school year – and at 6-foot-2 and nearly 240 pounds he is not a prototypical mountain climber.

"It’s really inspired everyone,” says Danielle Gagnon, assistant director of admissions and marketing at the British International School. “He’s been walking and climbing everywhere he goes, and seeing him do something so out of the norm has shown his students that they can do anything they put their minds to if they want it enough."

Macrae assumed he would be trekking up Mount Washington alone. However, several colleagues and student families will join him – for some of the climbs – another testament to the respect they have for his effort.

"Andrew talked openly with his pupils about his wife’s cancer, and in doing so he brought the real world into the classroom," says parent Niall Keating, who with his sons Conor, 11, and Cathal, 10, will join Macrae on two of his six hikes. “He has taught us all that we don’t need to leave our kids in the dark; in fact, we shouldn’t, on matters as important as this.”

Adds Conor Keating, "Mr. Macrae was grateful when the whole class supported him while his wife had cancer. I want to support him again, but this time for more than one person.”

Emily Macrae is still not strong enough to join the climb, but she will be waiting with Laughton when Andrew finishes his last ascent on August 15.

"We had such an amazing experience at Dana-Farber, and were given so much," says Emily, now cancer-free. "This is a way to say thank you for helping us over our own mountain."