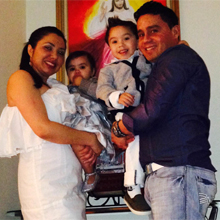 Ronaldo de Oliveira was close to death. The 33-year-old father of two young children had been diagnosed with myeloid sarcoma, a rare form of leukemia that worsened despite treatment with six different chemotherapy regimens. His wife pleaded with his oncologist, Richard Stone, MD, director of the Adult Leukemia Program at Dana-Farber, to find something else – anything – that might save him.

"He was really sick," says Stone. He was ready to try another conventional chemotherapy as a last-ditch effort, but he wasn’t overly optimistic. Then, Stone got a phone call from Neal Lindeman, MD, head of the Center for Advanced Molecular Diagnostics at Brigham and Women's Hospital (BWH) that offered a glimmer of hope. Lindeman's laboratories analyze DNA samples from patients’ tumors, scouring them for mutations and other alterations that might be attacked by targeted cancer drugs. This is the goal of Profile, the large cancer gene testing research project being carried out at Dana-Farber, BWH, and Children’s Hospital Boston (CHB).

Lindeman told Stone that the analysis, known as next-generation sequencing, had spotted an unusual flaw in the tumor’s DNA code. Two separate genes, FIP1L1 and PDGFRA, were stuck together, or fused, causing an abnormal protein to be made. It was a finding that had never been reported in De Oliveira’s disease, but it was a mutation known to be present in a different blood cancer. Even better news: Stone and other Dana-Farber physicians had previously discovered that the targeted drug imatinib (Gleevec) was highly effective against this particular mutation.

The Profile results changed everything. Instead of conventional chemotherapy, Stone ordered an immediate switch to Gleevec.

"Within five days he was getting better," Stone says. Four weeks later, scans showed the tumors in his neck and abdomen had shrunk. Ten weeks after starting Gleevec, De Oliveira was able to have a stem-cell transplant. Now, while still taking Gleevec, he has no signs of the cancer that nearly killed him. So dramatic was his turnaround that doctors call cases like his "Lazarus" outcomes, referring to the Biblical story of a dead man who returned to life.

Laura MacConaill, PhD, scientific director of Profile, notes that this case and others like it show that genetic tumor testing can be ‘incredibly informative and clinically useful, and they tell us that we’re very much on the right track.”

De Oliveira’s remarkable recovery may be the most dramatic outcome in the Profile knowledgebase so far, but other patients have also benefited from the discovery of their cancer’s weaknesses. In some instances Profile has identified unexpected flaws to which targeted drugs can be matched. In others, Profile has refined the original diagnosis or found that it was erroneous, leading to a revised diagnosis and changing the current therapy to a more effective one.

The move toward basing cancer treatments on the genetic characteristics of a patient’s tumor is still in early days, but cases like this represent the promise. More than 15,000 patients have had their tumors analyzed through Profile. About 20 percent of them have been found to contain mutations that predict how they’ll respond to approved drugs. Another 54 percent contain mutations that might predict their prognosis or response to experimental agents – and such patients may be considered for clinical trials.

"Understanding the genetic abnormalities of tumors can guide therapy in a very powerful way," says Stone. "It’s the ultimate in personalized cancer care."

More than two years after nearly everyone thought his chances at survival were slim at best, Ronaldo de Oliveira would agree.