For young fans enjoying cancer respite at Bruins game, score is not a factor 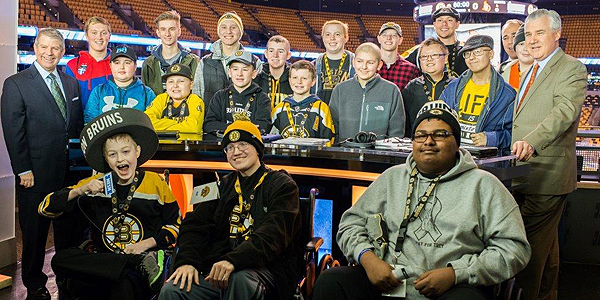 If somebody happened to stop by the private luxury box at TD Garden where a group of 22 teenagers were enjoying the Boston Bruins-Ottawa Senators hockey game on April 9, they would have been surprised to learn two things:

The patients at Dana-Farber/Boston Children’s Cancer and Blood Disorders Center, who are receiving treatment in the Jimmy Fund Clinic, attended the Saturday afternoon game as part of the clinic’s ongoing efforts to give pediatric patients opportunities to bond away from the hospital and their families.

"The score didn’t get us down too much; we were just happy to be there," says Alex Smith, 21, a two-time acute lymphocytic leukemia patient. "I made a few new friends, and because I’m older and have been through treatment before, I could be a role model for some of the younger kids."

Alex’s mom, Angela, jokes that, "it takes a lot to upset a cancer patient," and this crew had plenty to distract it from the score. In addition to a lunch and use of the suite – a gift to the Jimmy Fund Clinic from the Nathan D. Crowell Memorial Fund in memory of their hockey-loving brother and son, Nathan – there were visits from Bruins player Jimmy Hayes, mascot Blades, and members of the Boston Bruins Ice Girls. Each patient also received team backpacks filled with Bruins gear, and a pregame visit to the broadcast booth of Dale Arnold, who calls Boston games for NESN.

"When it was 4-1 after the second period, I asked one of the teens if he was down, and he told me, 'It’s not about whether they win or lose, it's about just taking in the experience,'" recalls Jen Noonan, MSW, Jimmy Fund Clinic adolescent specialist, who organized the event along with colleague Lisa Scherber, director of Patient and Family Programs at Dana-Farber/Boston Children’s. "That really validated what we’re trying to do with these outings."

It also explains why the game was a high priority for these kids, even if they were not big hockey fans. Alex Smith found out the day before that his blood and platelet counts were low, so clinic staff worked out an arrangement for him to get infusions until late Friday night and still make the Saturday trip.

Jake Decarolis learned he had a brain tumor in September – two weeks into his senior year of high school. He wasn’t well enough in February to go on the clinic’s annual trip to Red Sox spring training in Florida, but he wasn’t going to miss this outing.

"It was great to be around a bunch of kids who are all going through pretty much what I am," says Decarolis. "I was talking a lot to this one kid who is the same age as me and lives one town over. My family met his in the Jimmy Fund Clinic, but this was different; it was cool to be able to hang out with someone my own age, dealing with the same challenges."