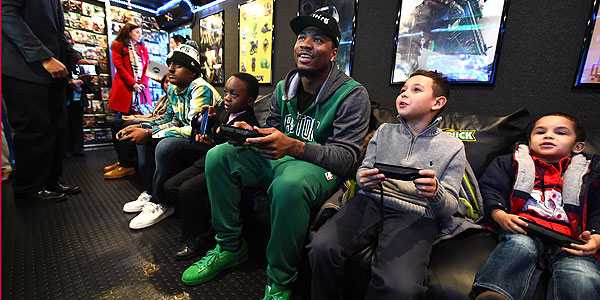 Smart dueled his young guests in various video games, including an NBA contest where he played as himself (Brian Babineau photo)

Smart treated five adult patients from Dana-Farber and their families to an evening of fun December 10 at the Celtics practice facility in Waltham. During the event, patients and their loved ones toured the facility, shot baskets alongside the 6-foot-4 guard, and got to meet Boston coach Brad Stevens. The youngest attendees also enjoyed additional time with Smart aboard an interactive video game truck he brought in for the occasion.

It was Smart’s way of keeping a promise he made to his mother while growing up in Oklahoma. Smart vowed that if he ever had the opportunity, he would look out for others the way Todd had looked out for him.

"My brother was diagnosed when he was 15, and he dealt with cancer for 18 years, but you never saw him down," says Smart. "You always saw him smiling and happy, helping others.

These kids have been through the same type of adversity as me, and there is just a connection I have with people like that."

Smart made an impression on the patients he met at his event. In one family, there were twogenerations of cancer survivors who enjoyed the occasion – die-hard Celtics fan Carlton Nickerson and his son, Carl II. 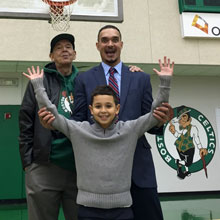 Three generations of Nickersons– cancer survivors Carl I and Carl II, along with grandson Carl III– enjoyed the event

"We brought my girlfriend Tatiana and my 9-year-old son Carl III, and we all had a great time," says Carl Nickerson II, a testicular cancer survivor treated at Dana-Farber who now educates other men of color about the disease. "Marcus and I had a deep conversation about the purpose and meaning of giving back, and when my dad told him about his own battle with colon cancer, Marcus looked at us and said, 'You guys give me inspiration.' That was pretty cool."

At the end of the evening, Smart gave the kids gift bags with sneakers, autographed jerseys, basketballs, and tickets to an upcoming Celtics game. In addition to being a welcome diversion from cancer, the night may have helped spur the career of at least one future teammate for Smart.

I’ve been trying to get my son into basketball for a long time, and it’s been tough because he wasn’t big enough to really reach the basket," says Carl Nickerson. "But he’s just had a growth spurt, and after we hung out with Marcus, he said to me, 'Hey dad, can we go shoot some hoops?'"