Cancer and a return to sports 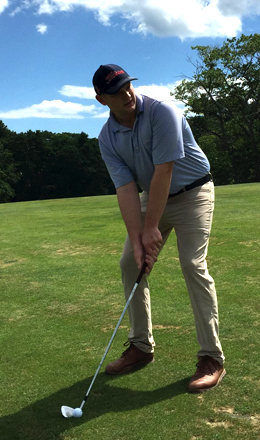 He’s never made a hole in one, but Rob Nutter feels lucky whenever he steps on the golf course these days. Lucky to be playing – and thankful to be alive.

Nutter, a Kennebunk, Maine, native, is nearly up to par after 18 months of treatment at Dana-Farber/Brigham and Women’s Cancer Center (DF/BWCC) for acute myeloid leukemia. The 26-year-old will detail his cancer journey, which included a stem cell transplant in July 2015, during the 15th annual WEEI/NESN Jimmy Fund Radio-Telethon presented by Arbella Insurance Foundation on August 29 and 30 at Fenway Park.

The Radio-Telethon includes 36 continuous hours of broadcasting, from 6 a.m. to midnight on both days. To commemorate the 15th anniversary of the event – which raised more than $3.5 million in 2015, bringing its 14-year total to more than $40 million – programming will contain highlights from past Radio-Telethons.

Among those sharing their stories on-air will be Dana-Farber doctors, nurses, researchers, and celebrities including Boston Red Sox players The true stars, however, will be patients and their loved ones discussing how they are living with and beyond cancer.

For Nutter, who was also a college baseball and basketball player, getting back to his favorite game was a prime motivator during week-long hospital stays for pre-transplant chemotherapy infusions, as well as months of isolation at home after the procedure to protect his immune system.

Predictably, the first thing he asked his oncologist, Edwin (Ted) Alyea, III, MD, after his transplant was when he could play golf again. Alyea said it would take some time. Nutter kept asking. Finally, after two months, Alyea gave his OK – provided Nutter take precautions to ensure his immune system was not compromised on the course.

"I had to wipe down my cart with antiseptic before I got in, and had to jump around to different holes so I wouldn't be near anybody," says Nutter, who is now training in Maine and Florida for his Professional Golfers’ Association teaching certification. "Because Dr. Alyea is a big golfer himself, I think he could tell how much this meant to me." 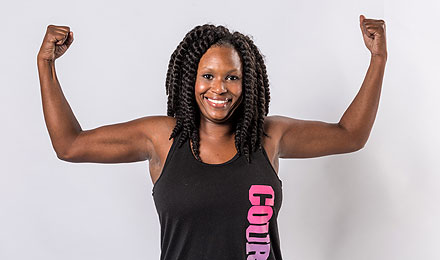 Another person who understands Nutter’s passion is Stephanie Jean. A healthy, athletic 17-year-old when she was diagnosed with desmoplastic small round cell tumor, a very rare, aggressive cancer that starts in the abdomen, she went through a year of treatment at what is now Dana-Farber/ Boston Children’s Cancer and Blood Disorders Center while completing high school. Sports were put on hold.

Jean’s last appointment as an active patient was on her 18th birthday, and she has gone on during her 11 years of remission to become a social worker for the state of Massachusetts. She has also returned to an active lifestyle, running in road races and teaching a fitness class at Cambridge Seventh Day Adventist Church when not chasing after her 7-year-old son, Julien.

"I acclaim my health success as a runner and mother to Dana-Farber," says Jean. "My church has allowed me the creative freedom to share my love for physical health with other members, and when people get to know me and learn that I am a survivor, they are amazed. I am grateful to have both the physical and mental strength to enjoy my childhood passion."

The Radio-Telethon is part of "Jimmy Fund Month" at Fenway Park, a month-long celebration of the 63-year partnership between the Red Sox and the Jimmy Fund – the oldest and most successful union between a team a charity in professional sports history.