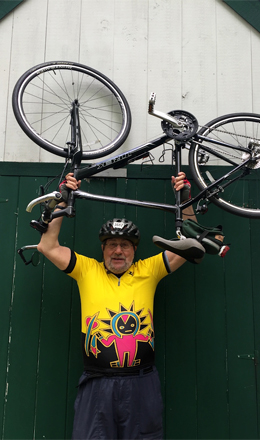 Active in physical pursuits and a world traveler, Harry Beskind, MD, was surprised when he started feeling tired while on a bike ride in 2014. He had just returned home from a river trip to Portugal with his wife, and Beskind, then 82, was having trouble riding up hills on his bike. “I thought I was just getting older,” he says.

When swapping out his pedals and making adjustments to his bike didn’t improve his fatigue, Beskind made an appointment with his doctor. A blood test revealed that Beskind had pancytopenia – low white blood cells, platelets, and hemoglobin.

No stranger to healthcare, Beskind, a retired psychiatrist and psychoanalyst, was referred to Dana-Farber by a hematologist near his home in Maine. Beskind, his wife, and son traveled a few days later to meet with Richard Stone, MD, program director of the Adult Leukemia Program at Dana-Farber.

“This part of the story is what I subtitle ‘A case of clinical judgment, courage, and opportunity’,” Beskind says.

A few days later, Beskind had a diagnosis: acute myelogenous leukemia (AML). Beskind’s leukemia also had a particular genetic mutation that occurs in only 15-20 percent of AML patients. Stone recommended that Beskind enter a phase 1 study for AG-120, an experimental drug that was designed to inhibit the action of the mutation that was causing Beskind’s cancer. This involved weekly – and sometimes week-long – visits to Boston during a snowy winter in 2015, but the only alternative was basic supportive care with a short survival prognosis.

Beskind proved to be a hardy patient. While waiting to participate in the trial, he was hospitalized for three days with the flu. Once admitted to the study, he had to be taken off the medication because of a severe rash. Stone found a dosage level that Beskind could tolerate and, in four weeks, Beskind went into complete remission – one of only a few participants who achieved that response. Beskind was an exceptional responder, a patient who achieves a dramatic, unexpected outcome with an experimental drug that has failed in most similar cases but is extraordinarily effective in one or a few individuals.

Today, Beskind is still in remission and is training for the Pan-Mass Challenge (PMC) as the event’s oldest rider. “I set up a bike trainer in my basement and, under the coaching of a triathlete in my hometown, am determined to celebrate my survival and the incredible work of Dana-Farber,” says Beskind, who will turn 84 just days before he rides the Wellesley to Patriot Place leg of the PMC.

Travel is central to Beskind’s plans for the future. He and his wife just returned from a trip to Morocco and Amsterdam, and they have more travels planned for the summer to see their grandchildren. When he’s not traveling or riding, Beskind enjoys creating his own artwork like the painting above, inspired by his cancer experience.