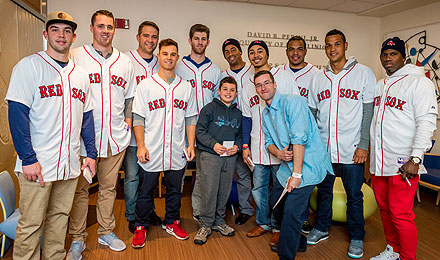 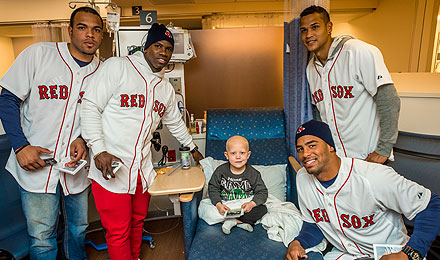 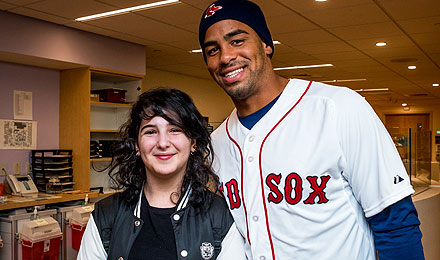 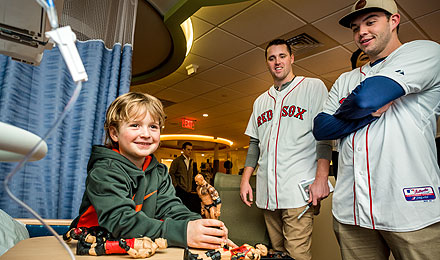 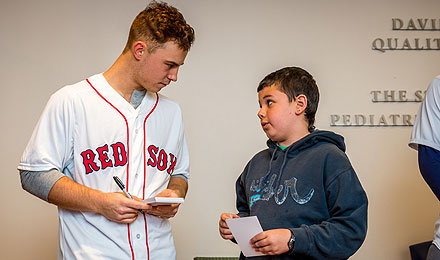 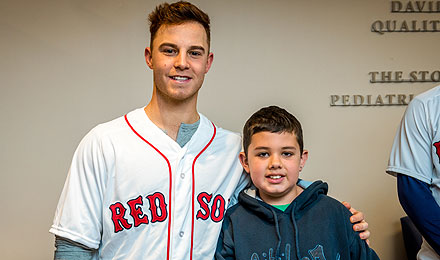 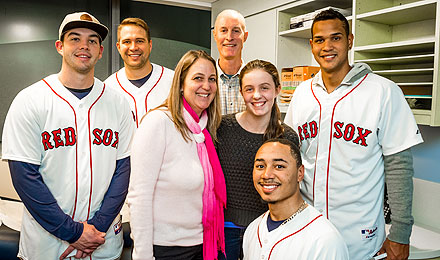 Nine-year-old Ethyn Yates has traveled twice to Dana-Farber Cancer Institute from his native Australia in the past three years, and both times the Boston Red Sox have made the nearly 11,000-mile trip a lot less scary.

Yates, who had come to Dana-Farber/Boston Children’s Cancer and Blood Disorders Center in late 2013 for the Gene Therapy Program for the genetic disorder Adrenoleukodystrophy, was at the Jimmy Fund Clinic last Thursday for a one-year checkup. What he and his dad Jason didn’t know is that nearly a dozen young Red Sox players would be visiting the clinic that afternoon as part of the team’s annual Rookie Development Program.

It was a case of déjà vu for the father and son. One day after the Yates came to Dana-Farber/Boston Children’s for Ethyn’s transplant in October of '13, the Red Sox clinched the World Series championship at nearby Fenway Park – setting off a loud, all-night party that his parents told Ethyn was just for him. He knows better now, but getting a handful of autographed pictures and the chance to chat with up-and-coming second baseman Sean Coyle made for another big thrill.

"What a day; we had a great checkup, and now this," said Jason Yates as his son and Coyle posed for photos. "Cricket and soccer are our main sports at home, but Ethyn has started playing baseball, which makes this a lot more special."

The Rookie Development Program is designed to introduce new and young Red Sox players (including minor leaguers) to different experiences they’ll encounter with the organization. One of these is the team’s unique relationship with Dana-Farber and the Jimmy Fund, which dates from the 1950s when Sox legend Ted Williams and his teammates were the ones making the short walk from Fenway to Dana-Farber.

"Having you come in here truly makes a world of difference to these patients,” Jimmy Fund Clinic Adolescent Specialist Jen Noonan told the players at the end of their January 15 visit. "Kids and their parents sometimes have to be here all day, so we try to make it as fun for them as possible.”

Noonan told the players to "look for us at spring training," when a contingent of teenage clinic patients and chaperones will head down to Florida to see the Red Sox play exhibition games. Danny Marchibrouda, age 6, isn’t old enough to go on this annual trip, but he was the center of attention on January 15 – drawing applause from a group of players as he lined up and knocked down his action figures again and again.

"Just look at him smile," said Amy Marchibrouda, Danny’s mom, as she surveyed the scene. "This is a nice surprise, and another example of what a wonderful job they do for the kids here."

The good feelings work both ways.

"If we can take an hour out of our day to make somebody else’s day better, that’s what it is all about,” said Coyle. “It’s great to learn about the history of players coming here, and to be a part of it."