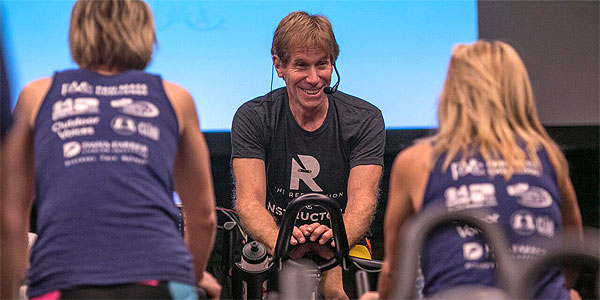 Billy Starr, founder and executive director of the PMC, and a DFCI Trustee, motivates participants during
The Resolution. Photo by Drea Catalano of 13 Photography

Getting in shape is always a popular New Year's pledge, and more than 400 people adopted it in style for 2016 by helping launch a unique new fundraiser for Dana-Farber and the Jimmy Fund.

The Resolution by PMC, the first indoor cycling event from the Pan-Mass Challenge (PMC), was held at The Club by George Foreman III in the Seaport District on January 2 and 3. Offering a new spin on traditional bike-a-thons, The Resolution also jumpstarted fundraising efforts for the 2016 PMC, which aims to raise $46 million for cancer research and clinical care at Dana-Farber.

"We are thrilled to introduce the camaraderie and culture of commitment of our organization to a new group of fitness enthusiasts," says Billy Starr, founder and executive director of the PMC, and a DFCI Trustee. "The cyclists and instructors that participated came together and motivated one another to fight for an effort much larger than themselves."

For Alyssa Rotman, a longtime patient at Dana-Farber and Massachusetts General Hospital who has trained at The Club by George Foreman III, the event was a chance to celebrate a healthy year and thank her doctors, nurses, and others who have supported her.

"An event like this helps me give back to all of the people whose strengths contribute to my own," says Rotman, 30, a survivor of both thyroid and breast cancer. "Since cancer touches so many in so many different ways, it is an amazing and inspiring chance to get all of these people in one place working towards a common goal: closer to a cure, and helping another patient, family, friend, or caregiver stay strong and brave in the meantime."