Meet the Chairman of the Jimmy Fund: Larry Lucchino

As Chairman of the Jimmy Fund, Lucchino, who is also Chairman of the Pawtucket Red Sox, is the lead ambassador and public spokesperson for the Jimmy Fund to strengthen relationships with the corporate community and professional sports teams, to strategize on policy and fundraising initiatives, and to recognize the many passionate donors and event participants. Lucchino helps increase awareness of the importance of philanthropic support for Dana-Farber and highlight the breakthroughs and milestones Dana-Farber doctors and researchers have achieved toward finding cures and treatments for cancer as a result of Jimmy Fund support.

"The opportunity to participate in the leadership of the Jimmy Fund is an honor and a duty," said Lucchino. 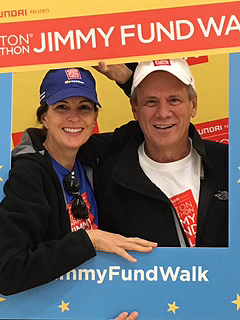 A Dana-Farber Trustee since 2003, Lucchino and Chairman of the Board of Trustees Joshua Bekenstein were also co-chairs of Mission Possible: The Dana-Farber Campaign to Conquer Cancer, which was completed in 2010 and raised $1.18 billion. In addition, Lucchino chairs the Institute's Trustee Development Committee.

In 1985, prior to his position with the Boston Red Sox, Lucchino, then vice president/general counsel of the Baltimore Orioles, was diagnosed with non-Hodgkin lymphoma at age 40. He chose Dana-Farber, one of the country's leading transplant centers, to receive chemotherapy and an autologous bone marrow transplant. Under the care of Lee Nadler, MD, and the late Emil "Tom" Frei III, MD, Lucchino received a transplant and was in isolation for 38 days. On the day he was released, seeking a return to a normal life, Lucchino attended his first Red Sox game at Fenway Park. John Harrington, then chairman of the Boston Red Sox, arranged for Larry to watch the game from an empty glass-enclosed broadcast booth, given his weakened immune system.