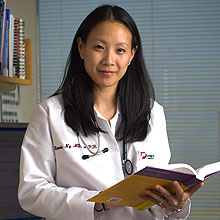 According to a new study led by researchers at Dana-Farber Cancer Institute, clinical trial patients with metastatic colorectal cancer who had high levels of vitamin D in their bloodstream prior to treatment with chemotherapy and targeted drugs, survived longer, on average, than patients with lower levels of the vitamin. Those findings were reported today at the 2015 American Society of Cancer Oncology (ASCO) Gastrointestinal Cancers Symposium in San Francisco.

The research, based on data from more than 1,000 patients with metastatic colorectal cancer who enrolled in a phase 3 clinical trial of chemotherapy plus biologic therapies, adds to vitamin D’s already impressive luster as a potential cancer-inhibiting agent. In the study, patients with the highest blood levels of vitamin D survived for a median period of 32.6 months, compared to 24.5 months for those with the lowest levels.

“This is the largest study that has been undertaken of metastatic colorectal cancer patients and vitamin D,” said the study’s lead author, Kimmie Ng, MD, MPH, a medical oncologist in the Gastrointestinal Cancer Treatment Center at Dana-Farber. “It’s further supportive of the potential benefits of maintaining sufficient levels of vitamin D in improving patient survival times.”

The study didn’t examine whether there is a biological cause-and-effect relationship between higher vitamin D levels and extended survival. As a result, researchers said, it’s too early to recommend vitamin D as a treatment for colon cancer. Ng and colleagues at Dana-Farber are conducting clinical trials to further investigate whether vitamin D supplementation is useful in treating the cancer.

In the study, researchers measured blood levels of 25-hydroxyvitamin D, a substance produced in the liver from vitamin D, in 1,043 patients when they enrolled in a phase 3 trial of three different drug combinations for newly diagnosed, advanced colorectal cancer. Patient vitamin D levels ranged from an average of 8 nanograms/milliliter (ng/mL) in the lowest group to an average of 27.5 ng/mL in the highest group. The average level in all the patients was 17.2 ng/mL. Current practice guidelines from the Endocrine Society define vitamin D deficiency as having less than 20 ng/mL.