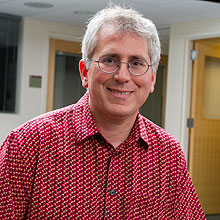 The vast majority of DNA inside our cells used to be viewed as genetic “junk” because it doesn’t produce proteins that operate our bodies. But within this “non-coding” DNA, which makes up about 97 percent of the human genome, scientists are discovering defective switches that can rev up cancer-causing genes.

In a recent report in Nature Genetics, Dana-Farber investigators, led by Matthew Meyerson, MD, PhD, sifted through DNA in 30 types of cancer, looking for non-coding regions that are amplified – that is, too many copies are strung along a chromosome. In the DNA from 12 kinds of cancer, they found six amplified regions that were adjacent to four known cancer-causing genes. On closer inspection, some of these amplified regions turned out to be “super-enhancers” – large clusters of enhancers, which are small pieces of DNA that turn on genes to make proteins.

To test their hypothesis that amplified super-enhancers were driving cancer gene expression, the researchers carried out an experiment involving MYC. They used gene-editing techniques in lung cancer cells to silence one of the elements in the super-enhancer cluster located close to the MYC gene. This maneuver slowed activity of the MYC gene and genes under its control, which in turn impaired cancerous growth of the cells.

The authors note that the super-enhancer amplifications represent a new, and apparently common, class of structural alterations in the genome that turbocharge cancer-causing genes. They add that further investigations into this mechanism could yield potential targets for anticancer drugs. Meyerson, of Dana-Farber’s department of Medical Oncology and Center for Cancer Genome Discovery, is an American Cancer Society Research Professor.