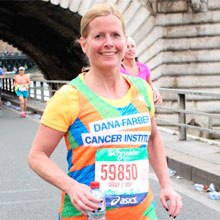 Sigrid Wheatley approaching the finish line at the 2015 Paris Marathon

Clad in her brightly-colored team singlet, Sigrid Wheatley loved hearing shouts of encouragement while running the B.A.A. Half Marathon® in Boston last October in support of Dana-Farber and the Jimmy Fund. When she took on her first full marathon for the same beneficiary this April, she heard the cheers again – and even some shouts of “Go Red Sox!” – only this time the personalized support surprised her.

After all, she was running the streets of Paris.

“There must have been a lot of Americans in the crowd, or they were being friendly when they saw ‘Dana-Farber’ across my shirt, but either way it was exhilarating,” says Wheatley. “Waiting at the starting line for our wave to take off, people were asking me, ‘What is Dana-Farber?’ and I was proud to tell them. It’s easy to talk about something you really believe in.” 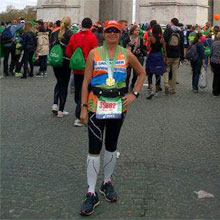 Wheatley took advantage of the Run Any Race program, which allows individuals to fundraise for patient care and cancer research at Dana-Farber while competing in any race, anywhere. She was one of two women who ran the Schneider Electric Paris Marathon on April 12 in support of Dana-Farber. Sylvia Janet Rivera also completed the scenic 26.2-mile course, which passed along the River Seine and by Notre-Dame, the Eiffel Tower, and other city landmarks before finishing at the Arc de Triomphe.

Although they did not have hundreds of Dana-Farber teammates to keep them moving, Wheatley and Rivera said the beautiful views and sense of purpose they felt were powerful motivators.

"You get such a different feeling when you cross the finish line knowing you have run to help fight cancer," says Rivera, who lost both her parents to lung cancer. “When you are doing something for a cause, it pushes you along to the end.”

Rivera has been running competitively for just five years, but has already completed more than 105 long distance races – 79 half marathons, 25 marathons, and an ultra-marathon. She began racing when she learned her mother had cancer, because “I wanted to do something to help her and others beyond contributing here and there.” She set a goal to run a race in all 50 U.S. states by her 50th birthday next year, and is already more than two-thirds of the way there. “I feel my mother is out there running with me,” she says.

Started in 2005, the Run Any Race program has grown rapidly. "The first year 13 runners raised a total of $14,000,” explains Jan Ross, assistant vice president for Running Programs at Dana-Farber. “Since then about 1,500 runners have joined Run Any Race to participate in 5Ks, ultra-marathons of 50 miles or more, and everything in between, collectively raising more than $2 million. People love having the opportunity to help Dana-Farber while participating in races around the world.”

Wheatley, 54, appreciates the easy-to-use technology provided to all Run Any Race participants, which included links from her appeals to her personalized fundrasier page. And while she doesn’t have a 50-state goal like Rivera, she does have loved ones who have been affected by cancer – including one friend treated at Dana-Farber who has ridden in the Pan-Mass Challenge (PMC) for nearly 15 years.

“I’ve supported her for the PMC, and she’s supported me for the half marathon and marathon,” says Wheatley. “Dana-Farber is the winner both ways, which is wonderful.”

Now Wheatley has a new goal: to run at least one marathon each year – with all of them benefitting Dana-Farber.