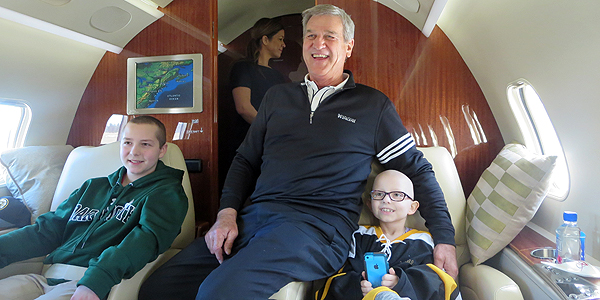 Cancer may have cost Miles Goldberg part of one leg, but it has not stopped the 12-year-old from pursuing his passions of baseball, hockey, and football – or from enjoying the weekend of his dreams with some of Boston’s most beloved athletes.

Miles and Allisa Freiberger, 9, both patients at Dana-Farber/Boston Children’s Cancer and Blood Disorders Center, flew on a private jet on February 19, joined by family members and a very special companion: Boston Bruins hockey legend Bobby Orr. The group’s destination was Fort Myers, Florida, where Miles and Allisa attended Boston Red Sox spring training workouts and shared photos and high-fives with current and past Sox stars. Away from the ballpark they enjoyed dinner with Orr, swimming, and boat rides on a nearby lake, chronicling all of it on social media for friends back home.

"It was an incredible experience. The trip of a lifetime," says Miles, who required the partial amputation of his right leg after being diagnosed with osteosarcoma. Now, he skates and plays sports with a prosthetic. "I met the most amazing people."

Travel for the weekend getaway, as well as dinner for the families and Orr, was funded by Rectrix Commercial Aviation Services, as an auction item to help raise money during the 2015 WEEI/NESN Jimmy Fund Radio-Telethon, presented by Arbella Insurance Foundation. The auction winner donated the prize for use by Jimmy Fund Clinic patient families. Joining in the Florida fun were Gerry Callahan, John Dennis, and Kirk Minihane from WEEI-93.7 FM’s Dennis and Callahan Morning Show, on which the auction was held live last August.

The unique trip was the brainchild of Rectrix CEO Richard Cawley who was a teenage Bruins fan when Orr led the team to Stanley Cup championships in 1970 and ’72. The two have become friendly in recent years, and Cawley felt that Orr’s popularity and stellar reputation would make him the perfect weekend companion. The fact that Cawley’s daughter was a patient in the 1980s at Boston Children’s Hospital – Dana-Farber’s pediatric care partner – made the Jimmy Fund a logical beneficiary.

Allisa’s mother, Nanette, says the surprise weekend came at the perfect time for the young brain tumor survivor. After 15 months of treatment, Allisa had her last dose of chemotherapy on January 29 in the Jimmy Fund Clinic. A few weeks later she was hugging Hall of Fame pitcher Pedro Martinez and powering a speed boat.

"It was such an exciting way to celebrate, and the fact that Miles had recently finished treatment too made it even better," says Nanette Freiberger. "They bonded wonderfully; they were like a brother and sister." 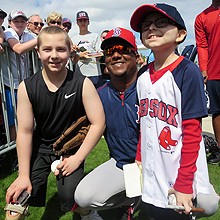 Miles and Alissa spent time with some of Boston's favorite athletes, including Pedro Martinez.

That wasn’t the only bonding. In addition to meeting stars like Orr and Red Sox Mookie Betts and Pedro Martinez, Allisa and Miles got to talk with Sox manager and fellow cancer survivor John Farrell, who missed part of the 2015 season while undergoing successful treatment for non-Hodgkin Burkitt lymphoma. Now he’s back in the game, just like the two young survivors who made such an impression on all they met during the weekend.

"Allisa and Miles are two of the most unbelievable young children that I have ever met -- real troopers and an inspiration," said Orr. "I have had the good fortune to be with many wonderful people in my lifetime, and I can tell you that I have never been more impressed with anyone’s character or determination as I was with my new friends.

"They are a couple of shining lights and true heroes."