How genetics can help predict — and sometimes stop — childhood cancers 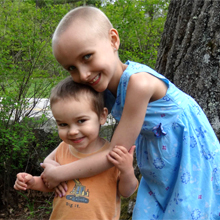 Amy Kindstedt was diagnosed with pleuropulmonary blastoma (PPB) in 2014, a rare cancer often caused by a mutation in the gene DICER1. Genetic testing revealed that Amy’s baby brother, Hunter, had the same mutation.

Amy Kindstedt hates cancer, but the 9-year-old is very thankful for one thing: Because genetic testing on her baby brother Hunter revealed he had the same genetic mutation she did, his cancer was caught much earlier –  possibly sparing him the same level of intense treatment she endured.

The mapping of the human genome has ushered in the age of precision cancer medicine, in which an individual’s treatment can be tailored to the specific genetic abnormalities of his or her disease. In recent years, much attention has been brought to genetic testing for cancer risk, particularly around Angelina Jolie and her decision to undergo preventative surgeries.

Sometimes, a gene that contributes to disease contains a mutation, similar to misspelling a word, which can lead to a higher risk of cancer. In Jolie’s case, this was a mutation in the BRCA1 gene. Knowing which mutated genes are at fault for a particular cancer can also help physician-scientists determine, through genetic testing, which members of a patient’s family may have the same mutations and be at higher risk.

"Parents often ask what caused their child’s cancer, whether it could be genetic, and whether other children in the family might also be at risk," says Junne Kamihara, MD, PhD, co-director of the Pediatric Cancer Genetic Risk Program. "We provide a team that can address these issues, with an excellent referral network of experts in the field all dedicated to working with our families to help find answers."

If a family is considering genetic testing, the family meets with Kamihara and her clinic colleagues to learn about genetics, hereditary cancer, and the genetic testing process, as well as to discuss the risks and benefits of testing. If a family decides genetic testing is right for them, it can be arranged through the Pediatric Cancer Genetic Risk Program – with adult relatives referred to the Dana-Farber Center for Cancer Genetics and Prevention. In cases where a family member is found to have an increased risk, the Cancer Genetic Risk team develops individualized programs to monitor for the earliest signs of cancer and in some cases to reduce the risks of primary or secondary tumors.

"We’ve offered genetic counseling for many years, but we are now able to offer more families genetic testing at an affordable cost because of advances with genetic testing technology. This has allowed us to identify more families with hereditary risk. Learning this information can be difficult for families. But, many families have said that knowledge is power and appreciate the opportunity to be proactive. It’s exciting that we are able to make such a difference in the lives of families we see," explains Jaclyn Schienda, ScM, CGC, a licensed genetic counselor with the Pediatric Cancer Genetic Risk Program.

Looking to the future

Among these families were the Kindstedts. Amy was a second grader when diagnosed in 2014 with pleuropulmonary blastoma (PPB), a rare tumor of the lung. PPB tumors can progress from a more benign to a more aggressive type if not detected early. Because she had a particularly aggressive form, her treatment required the removal of her left lung, radiation, and a year of chemotherapy.

Knowing that PPB is often caused by mutations in a gene known as DICER1, her Dana-Farber/Boston Children’s care team tested Amy for the gene. Once they found she had a mutation in the gene, her parents, grandparents, and younger brothers Hunter and Thatcher were tested as well.

Hunter, just 19 months old, was found to have the mutation. Two days after Amy’s lung removal surgery, a CT scan revealed Hunter also had a lung tumor, felt to be PPB.

“Less than a month after Amy’s lung surgery, Hunter had a tumor removed from his lung too,” recalls mom Susan Kindstedt. “Amy was in the middle of a five-day chemotherapy course, so while my parents sat with her in the Jimmy Fund Clinic at Dana-Farber, my husband and I were next door at Boston Children’s for Hunter’s surgery.”

Because he had no other symptoms, Hunter’s tumor would likely not have been caught until much later were it not for genetic tests revealing he had the DICER1 mutation. And, because his tumor was much smaller and at an earlier stage than Amy’s, his lung was saved and no further treatment was necessary.

Amy takes pride in knowing that she not only helped save her brother from pain, but that future generations of her family will now also know to be tested for DICER1.