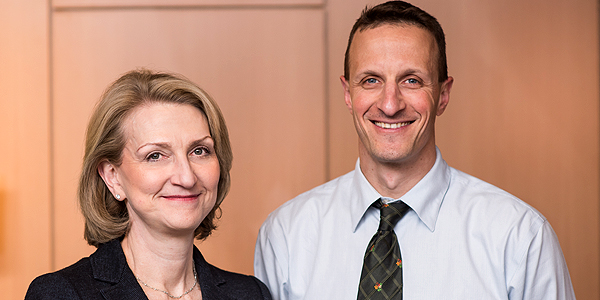 In a milestone for research conceived and brought to maturity at Dana-Farber, the Food and Drug Administration (FDA) has granted accelerated approval to the immunotherapy agent nivolumab for some patients with recurrent Hodgkin lymphoma.

The approval reflects the drug’s exceptional success in an initial pilot study and an ongoing phase 2 clinical trial. In the multi-institutional pilot study, led by Dana-Farber investigators Philippe Armand, MD, and Margaret Shipp, MD, nivolumab drove Hodgkin lymphoma into full or partial remission in 87 percent of patients, all of whom had drug-resistant forms of the disease. The results of the phase 2 trial, in which Dana-Farber is a participant, were presented at the American Society of Clinical Oncology annual meeting and are consistent with those of the pilot study, researchers say.

"This is a prime example of bench-to-bedside research at Dana-Farber," says Shipp. "It began when Dana-Farber’s Gordon Freeman, PhD, and his wife, Arlene Sharpe [MD, PhD], identified the PD-1 signaling pathway and described its role in protecting some tumors from attack by immune system T cells. It continued with the observation, by members of our group, that classic Hodgkin lymphoma features a chromosomal abnormality that causes two proteins – PD-L1 and PD-L2 – to be overproduced. This makes Hodgkin lymphoma especially effective at fending off a T-cell attack.

"Hodgkin lymphoma is unusual in that the tumor cells are interspersed among a vastly larger number of T cells," Shipp continues. "These factors led us to theorize that a drug like nivolumab, which blocks the PD-1 molecule on T cells, would release a powerful immune system attack on the lymphoma. Our initial pilot study, and now the phase 2 trial, have shown that to be the case."

The results of the initial clinical trial prompted the FDA to confer "breakthrough" status on nivolumab as a treatment for Hodgkin lymphoma, which made it eligible for accelerated approval if it performed as well in the phase 2 study. FDA approval is normally granted only after a new treatment proves safe and effective in a phase 3 trial.

"It’s very exciting that we’re able to offer this as standard therapy for this group of patients," Shipp remarks, adding that clinical trials are now underway that are testing nivolumab in patients with Hodgkin lymphoma at earlier timepoints, including as a front-line treatment for patients with newly diagnosed disease.