A special curriculum: Teachers tell their students about cancer 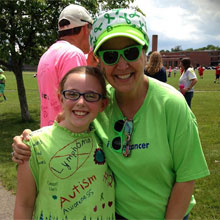 Gina Johnson and Connie Grayson have a combined 53 years teaching in the public school system. Last year, however, their cancer diagnoses prompted them to incorporate a new element into their lesson plans.

“When I was diagnosed with lymphoma in September 2015, one of my student’s moms had just passed away from cancer,” says Grayson, a fourth-grade teacher at the Arthur T. Cummings Elementary School in Winthrop, Mass. “I wanted to teach my students about cancer and let them know that not everyone who has cancer dies from it.”

Grayson gathered books and videos to help explain her diagnosis to her students, held video chats with her class while she was receiving chemotherapy, and made a “Cancer Meter” that she kept in her classroom throughout the year. 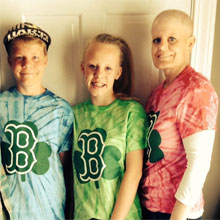 Gina Johnson and her two kids, Jaden and Hannah

Johnson, who was diagnosed with lymphoma in April 2015, wove her cancer experience into a preexisting program she had formed to help students improve their social skills.

"I began the Social Skills Curriculum around ten years ago in the hopes that it would teach children how to be empathetic and how to pick up on non-verbal cues," says Johnson, a reading specialist at Leahy Elementary School in Lawrence, Mass. "The program really took off, and kids started doing things like sharpening pencils for teachers when it seemed like they were having a bad day and collecting canned foods for less fortunate kids."

When Johnson was diagnosed, her kids wanted to give back for everything she had always given to them.

"I was overwhelmed by the outpouring of love I received from all the teachers and students at my school after my diagnosis," says Johnson, who completed treatment last September. "One day there was a traffic jam outside my house with all the people that had come over to bring me food, cards and words of support.”

Johnson and Grayson have used their programs to both fundraise for Dana-Farber and to provide materials and advice for adults in similar situations. Grayson was recently awarded a grant to help fulfill this mission, the money from which she is using to organize a "cancer fair" at her school in the fall. Grayson plans to give out resources to parents, answer questions, and help her students with their own fundraising efforts.

“My students have been making bracelets that they will sell at the fair,” says Grayson. “All the money they raise from this will help buy stuffed animals to give patients in the Jimmy Fund Clinic.”

At the Leahy School, Johnson’s students have raised money for Dana-Farber through collecting pennies, selling bracelets, and other initiatives. They have also given back to patients directly.

“Last Christmas, a bunch of us made cards to distribute to patients,” says Johnson. “I told my clinician, Dr. Ann LaCasce, 'I will always come back, and I will always give back.'"

As for the language to use when talking to kids about cancer, both Johnson and Grayson agree that honesty is important.

“When you are upfront with kids about cancer, it demystifies it a bit,” explains Johnson. “Then, children may feel comfortable coming to you and asking about their family members or friends who have cancer.”

Grayson was up front about her hair loss at the start of treatment, and asked her class whether or not they wanted her to wear a wig while she was at school. The class wanted her to wear one, but reconsidered at the end of the year.

“We were getting ready for a field day at school and the topic came up again,” says Grayson. “I took my wig off and my students decided that I looked better without it. They were proud of how far I had come.”