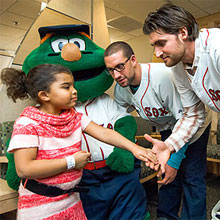 The Boston Red Sox may not have ended the 2012 season at the top of the standings, but they remain a source of joy for Dana-Farber patients of all ages – even Yankees fans.

"I was sick all this year, and watching Red Sox games was a great way to pass the time, even if they didn’t win," said one woman who was on Yawkey 10 for ovarian cancer treatment when her summer heroes arrived. "Seeing them here is so uplifting."

The feeling was mutual. Farrell, who was hired as manager last month but was the Red Sox pitching coach from 2007 to 2010, is aware of the unique bond between his team and Dana-Farber.

"This is such a big part of our [Red Sox] relationship with the city," said Farrell, who answered questions from patients and families on how he expects to turn around the club. "To recognize what these people are going through and the sacrifices they are making is humbling, especially this time of year."

While Farrell and his players enjoyed meeting all the families and staff members they encountered, they especially relished an infusion-bed visit with Cory Burke, a 12-year-old patient from Bristol, Rhode Island, and a self-proclaimed Yankees fan. As Wally removed his huge blue "B" cap and placed it on the boy’s head, Burke's mother, Susan, and Aunt Virginia – both proud members of Red Sox Nation – snapped photos. "That looks great on you!" said Kalish, as Cory smiled and admitted the Sox were OK, too.

"There are no words to describe how good it makes you feel to come in here and put a smile on their faces," said Carpenter. Adult patient John Cashman compared the morning to "a visit from Santa Claus," and on this day, certainly, the Red Sox were as popular as St. Nick himself.