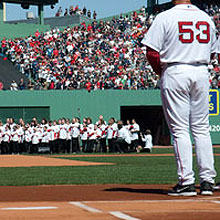 The Boston Red Sox won their home opener at Fenway Park Monday, but some of the day's biggest cheers came before the first pitch thanks to patients and staff from Dana-Farber Cancer Institute.

As part of the celebration of the 60th anniversary of the partnership between the Red Sox and the Jimmy Fund during the home opener, the Jimmy Fund Chorus – comprised of more than 150 staff, former and current adult and pediatric patients, and their family members – assembled in the Fenway outfield for their major league debut.

A sellout crowd of 37,008 fans joined as the group sang "Just One Person" and "The Star-Spangled Banner," their faces flashing across the huge Jumbotron. Chorus members wore Red Sox-style jerseys with "JIMMY FUND" across the chest, the number "60" on the back, and the Jimmy Fund/Red Sox anniversary logo on the sleeve.

"It was incredible to watch," says Ken Olson, whose son, Bennett, is a 9-year-old being treated for acute lymphocytic leukemia at the Jimmy Fund Clinic of Dana-Farber Boston Children’s Cancer and Blood Disorders Center. "Any break from cancer is welcomed by Bennett, and it meant so much to his big sister, Lilly, that they got to sing together in the chorus. The whole cancer experience has been tough on her as well."

Only when driving to the ballpark yesterday did Ken Olson realize the last time he was at Fenway for Opening Day was in 2004 – three days after Bennett was born. Now, he says with a laugh, his son and daughter are mini-celebrities. "People have been texting me and stopping us in the street ever since the game."

After the choral performance, simultaneous ceremonial first pitches to former and current Red Sox players near home plate further symbolized the strong ties between Dana-Farber, the Jimmy Fund, and the Red Sox. As current caregivers looked on, pediatric and adult patients treated here during each decade since the 1950s made the throws, as well as Dana-Farber Trustee David Perini – whose father, Louis Perini, helped found the Jimmy Fund in 1948 while he was owner of the Boston Braves baseball team and encouraged the Red Sox to carry on the cause.

Next, three Jimmy Fund Clinic patients and their siblings joined legendary Red Sox pitcher Pedro Martinez in yelling out “Play Ball!" just before the game began, and during the seventh-inning stretch, the Jimmy Fund Chorus assembled once more in the outfield for its final two numbers – "God Bless America" and "Take Me Out to the Ballgame." Formed this past winter, the singing group will appear at several other venues in coming months.

For all who took part, and all who watched, the moving festivities were something not to be forgotten. "If you had told me even two months ago that I would be well enough to walk onto the field at Fenway Park on Opening Day, let alone throw out a pitch, I would have said no way," says Marlene Nusbaum, a 10-year breast cancer survivor who in October had a benign brain tumor "much bigger than a baseball" removed.

"Smelling the hot dogs, feeling the grass beneath my feet, hearing the cheers – it was one of the best days of my life."