Father honors son by taking a swing against cancer 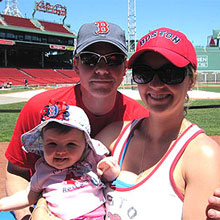 Eric Critchley did not achieve his childhood dream of making the Boston Red Sox, but recently he got to play on the very same diamond the Red Sox call home – hitting and fielding in honor of his late son, Tucker, during John Hancock Fenway Fantasy Day to benefit the Jimmy Fund.

All money raised through John Hancock Fenway Fantasy Day supports research and patient care at Dana-Farber Cancer Institute, which, like the event's Fenway Park venue, has a special place in Critchley's heart.

Tucker was just five weeks old when he died in 2011 of infant leukemia. Each swing Eric Critchley took and each catch he made on June 15, 2013 was his way of keeping his son's spirit alive and helping other individuals and families facing cancer.

"It feels great to do this for Tucker, because if he was anything like me, he would have loved to do it," says Critchley, 34, who helped the 2013 event raise more than $150,000 for the Jimmy Fund and Dana-Farber through friends and family who sponsored his Fenway appearance. "We used to joke that if he [Tucker] got my arm and my father-in-law's size, he'd have been a force to be reckoned with on the diamond."

Since 1992, the event has collected more than $7 million for the Jimmy Fund by giving people like Critchley – a Weymouth, Mass. resident who played baseball locally at Scituate High School — the chance to fundraise their way onto the field. Critchley's dad and other family members were in attendance the day before Father's Day to cheer him on, including his wife, Ashley, and their 8-month-old daughter, Mia Hope.

It was Ashley who first thought of raising money for Dana-Farber in Tucker's memory; she planned to run the 2012 Boston Marathon® with Eric, but had to stop training when she discovered she was pregnant with Mia. This left the task to Eric, who finished the 2012 marathon and then took care of another bucket list item by slamming three hits off of Fenway's fabled Green Monster left-field wall this June. Making the moment even more special was that former Red Sox relief ace and 2004 World Series hero Keith Foulke was serving as a pitcher for Critchley and several others who joined the John Hancock Fenway Fantasy Day lineup.

Among the littlest participants to step to the plate on the picture-perfect day were current pediatric cancer patients receiving treatment in Dana-Farber's Jimmy Fund Clinic. Two-year-old Gavin Strand of Ashburnham, Mass., was taking his swings one year to the day after he was diagnosed with High Risk Pre B Cell Acute Lymphoblastic Leukemia.

"It was amazing to see Gavin batting and running around Fenway," says Katie Strand, Gavin’s mother. "One year ago we had just learned he had leukemia, and at Fenway we celebrated how far he has come. We feel blessed to have had this experience."

Eric Critchley is in agreement.

"This was a great Father's Day present from Tucker," says Critchley, who proudly collected an "I Hit the Wall" T-shirt at the event and got to hear Tucker's name announced as Eric rounded the bases after his at-bat: "Those swings were taken in honor of his son, Tucker Joseph Critchley."