Tim Wakefield has special role in fight against cancer 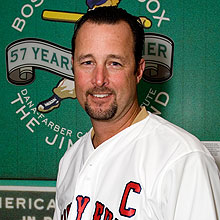 Tim Wakefield, the longest-tenured member of the Red Sox, has made several trips down the street from Fenway to Dana-Farber to meet with patients through the years in addition to helping out with various fundraising events.

Wakefield has visited with Jimmy Fund Clinic teens during their annual road trips to Spring Training and during their regular-season Red Sox road game every year. He has participated in various WEEI/NESN Jimmy Fund Radio-Telethons, including doing Public Service Announcements.

In 1998, he started the "Wakefield Warriors" program, through which patients from Dana-Farber and Franciscan Hospital for Children visit with him and watch batting practice before all Tuesday games at Fenway Park.

The popular hurler's off-field efforts have earned him seven nominations for the annual Roberto Clemente Award presented by Major League Baseball to the player who best combines baseball skills with devoted work in the community. "Knowing these kids really keeps me grounded," Wakefield says. "I can't tell you how humbling it is to visit them. Just putting a smile on their faces might save a life."

In December 2005, Wakefield presented a check to the Jimmy Fund for $15,100 — $100 for each of his 151 strikeouts during the 2005 season. Wakefield and his wife, Stacy, visited patients at the Jimmy Fund Clinic and handed out Toys "R" Us gift certificates.

In April 2010, Wakefield joined Red Sox teammate Clay Buchholz as an inaugural Jimmy Fund Co-Captain. He signed on for the same role for 2011. As Co-Captains, Wakefield and Buchholz made visits to Dana-Farber, supported Jimmy Fund events, thanked donors, and raised awareness throughout Red Sox Nation.

For his work with the Jimmy Fund as well as his other community outreach endeavors, Wakefield earned the Roberto Clemente Award from Major League Baseball in 2010.

"I've often said how special it is to be a member of the Red Sox because of the passion New Englanders feel for baseball," said the former Red Sox player. "It's the same way with the Jimmy Fund. Every time I walk out to the mound and see that Jimmy Fund emblem out on the Green Monster, I am reminded of the special role the team has played in helping fight cancer since Ted Williams visited with patients at Dana-Farber back in the 1950s."