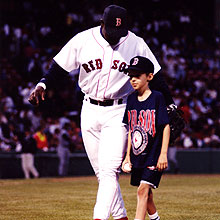 Possessing a huge physique and powerful bat, Red Sox first baseman Mo Vaughn was a dominating presence on the diamond. Off it, the 1995 American League MVP was a gentle giant and team leader who made helping others one of his top priorities.

Vaughn touched most everybody he met, but it’s doubtful he impacted anybody more than young Jason Leader. On April 24, 1993, the Red Sox were in California to play the Angels. When a Jimmy Fund representative met Leader on his 11th birthday that afternoon back at Boston Children’s Hospital, and learned that Vaughn was his favorite player, he contacted Red Sox broadcaster Joe Castiglione and arranged for Vaughn to call the young cancer patient in his hospital room.

Vaughn told Jason he would try to get a hit that night for the boy, "maybe even a home run," and then came through with a shot out of the park in the seventh inning – long after his young fan back east had fallen asleep.

Castiglione told radio listeners the story as Vaughn rounded the bases, and other media outlets picked it up. The next day Jason awoke to find flowers from strangers in his room and print and TV reporters seeking his feelings about what had happened. That's how he found out about the homer.

When the Red Sox returned from their road trip, Jason and Vaughn threw out the first pitch together before a game at Fenway. A powerful friendship developed between their two families, one that lasted long after Jason’s August 1994 death from cancer. 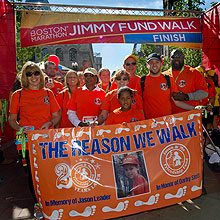 "You meet these young kids, they take to you, and before you know it you fall in love with them," said Vaughn. "The trials and tribulations you and I go through every day are minuscule compared to what these kids are going through every day. If you're 0-for-18 or 0-for-22, is it really that important? I think all of us players learned as much from Jason as he did from us."

Susan Leader, Jason’s mother, was moved by the care Jason and her entire family received from caregivers as well Vaughn. "Jason's doctor Tim Browder, his primary nurse Cynthia Reed, and everybody at Dana-Farber were just so wonderful to all of us, and Mo and his family made us feel like they had known us for years," recalled Susan. "We were from New York and we were Mets fans, but we soon came to love the Red Sox."

When Jason died at age 12, Vaughn went to the funeral. And in the years since, the two families have kept their bond alive by forming a "Jason and Mo Friendship Fund" team that has participated each fall in the Boston Marathon® Jimmy Fund Walk.

"You always want to make the reasons why you come back important and impactful, and this is for a great cause and in remembrance of a great young man," says Vaughn.