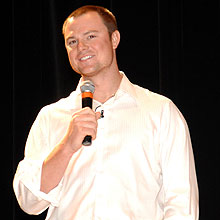 When Red Sox pitching ace Jon Lester won the clinching game of the 2007 World Series, patients at Dana-Farber were among those cheering the loudest. Their devotion was understandable; less than a year before, Lester had been among their ranks.

Lester etched one of the most moving stories in Red Sox history when he emerged as a ’07 postseason hero after spending much of 2006-07 being treated at Dana-Farber and the Fred Hutchinson Cancer Center in his hometown of Seattle for a rare blood cancer known as anaplastic large cell lymphoma (a form of non-Hodgkin lymphoma). The disease was diagnosed in August of 2006, cutting short the left-hander’s rookie season in Boston, but he fought to get his skills and strength back the next summer and was on the mound when it counting most in October.

The comeback earned Lester Major League Baseball’s Tony Conigliaro Award, given each year to a big leaguer who “overcomes adversity through the attributes of spirit, determination and courage that were trademarks of “Tony C” (who returned to play after a near-fatal beaning but eventually retired due to deteriorating eyesight related to his injury). Lester inspired cancer survivors of all ages – many of whom wrote him letters of encouragement during his illness.

It was only natural that he become an advocate for Dana-Farber and the Jimmy Fund, and he did, participating in events including New Stars for Young Stars, the WEEI/NESN Jimmy Fund Radio-Telethon, and the annual visits by Jimmy Fund Clinic teenagers to spring training and summer road trips. In 2009, Lester was spokesman for Rally Against Cancer and visited the "winning" school and business that raised the most for DFCI during the initiative.

By the time Lester starred on another World Series-winning Red Sox team in 2013, he was more than seven years removed from his cancer diagnosis. Still, he will never forget what it took to get him back in the game, and the people who helped him get there.

"I like to be known as [a cancer survivor]," he told USA Today. "It helps people. I want to be able to do that, and I’m proud of what I’ve come from."