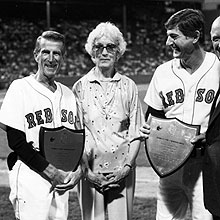 Although he was best known as one of the most beloved players/coaches in Red Sox history, Johnny Pesky will also be remembered as a great ambassador to the Jimmy Fund from the charity's earliest days.

Pesky was one of the first Red Sox players to embrace the Jimmy Fund as an official team charity in the 1950s, visiting young patients in the Clinic along with his teammate and close friend Ted Williams. He kept up his involvement through the decades, attending numerous fundraising events to benefit Dana-Farber both in and out of baseball season.

"We used to visit [Institute founder] Dr. [Sidney] Farber at least twice a year en masse as a team,” Pesky recalled years ago. “Seeing the looks on the faces of the kids was an incredible feeling, and I can't tell you how much it meant to us. When I get letters from fans and they send along something for me to autograph, I send it back with a note that says: 'I'll sign this if you make a donation to the Jimmy Fund.'"

In 1983 Pesky was given the Thomas A. and Jean R. Yawkey Award (now called the Boston Red Sox Jimmy Fund Award) – the Jimmy Fund's highest honor – for his commitment to Dana-Farber.

Pesky’s last visit to Dana-Farber came in 2005, when he and fellow Red Sox icons and Jimmy Fund supporters Bobby Doerr and Dom DiMaggio came by to say hello. Although many of the pediatric patients in the Jimmy Fund Clinic didn't recognize these kind older gentlemen, Pesky was an immediate hit when he started letting the kids try on his mammoth 2004 World Series ring, given to him for his service to that championship team as a special instructor.

"We're married now,” he joked with one young lady as he slipped the ring on her finger. That girl might not know Pesky was an All-Star shortstop, but like many others he touched at Dana-Farber, she would never forget the moment.