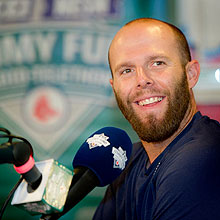 Dustin Pedroia has been an MVP for both the Red Sox and the Jimmy Fund. From meeting with young Jimmy Fund Clinic patients during spring training and the regular season, to helping promote Rally Against Cancer, he has shown the same dedication to Dana-Farber that he displays as a .300 hitter and Gold Glove second baseman.

"We’re just trying to put a smile on their faces," Pedroia said during one 2013 visit to Dana-Farber’s David B. Perini, Jr. Quality of Life Clinic, during which he dueled young patients in video games. "It’s pretty cool to come in here, see them, and do anything you can to help them."

Pedroia's devotion to the Jimmy Fund started early. During his rookie season of 2007, he was introduced by teammate Kevin Youkilis as his surprise guest during the second annual Rally Against Cancer. In 2008, Pedroia was a participant in New Stars for Young Stars. At this event, Pedroia was one of the new stars who signed autographs for fundraising fans of new and up-and-coming players from the Red Sox organization.

Pedroia says that Rally Against Cancer, in which fans make a gift to the Jimmy Fund along with a pledge to wear Red Sox gear to work or school on the day of the team’s home opener, “is a great [way] for fans to show support for my two favorite hometown teams [the Red Sox and the Jimmy Fund]."

"I've been to Dana-Farber and seen first-hand how overwhelming and life-altering cancer can be for families and patients," he adds. "Rally Against Cancer is an easy and fun way for everyone to help the Jimmy Fund, ultimately giving hope to the people who are fighting this awful disease."