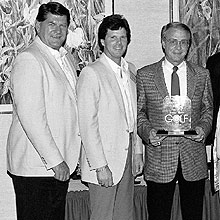 Dick Radatz, the Boston Red Sox relief ace whose powerful physique and fastball earned him the nickname "The Monster" during and after his 1960s heyday, was in fact a gentle giant whose generosity extended to many friends and charities — including the Jimmy Fund.

At 6-feet-5 and well over his 230-pound playing weight, Radatz was tough to miss at Jimmy Fund events, and he was always gracious in talking with his many fans. His trademark husky laugh was especially familiar to attendees at Jimmy Fund Golf tournaments, where Radatz was a longtime regular. In 1986, he earned the "Jimmy Award" as the individual who did the most for Jimmy Fund Golf that year.

"He was a good friend to me and a great friend to the Jimmy Fund,” said former Jimmy Fund Chairman Mike Andrews. "While he was playing and in the years that followed, he was always available to help us. He was a very well-spoken guy who could carry the Dana-Farber message in radio interviews or in person as well as anybody. He went out on many speaking engagements for us, and would send his fee in to the Jimmy Fund as a donation."

Radatz’s "Monster" nickname was alleged to have come from New York Yankees slugging great Mickey Mantle, who reportedly struck out 12 times in 16 times at-bat against him. In one memorable 1963 game, Radatz came in for the ninth inning against the Yankees and struck out Mantle, Roger Maris, and Elston Howard — the previous three American League Most Valuable Players — on a total of 10 pitches. He then thrust his arms over his head, a move that delighted the Fenway Park crowd and instantly became his trademark.