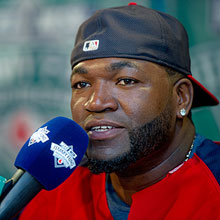 A clutch-hitting hero who has led the Red Sox to three World Series championships with his booming bat, David Ortiz has also made a big impact on Dana-Farber and the Jimmy Fund.

Ortiz – a gentle giant with a personality to match his physique – first became involved with the Jimmy Fund shortly after joining the Red Sox in 2003, meeting and taking photographs with pediatric cancer patients at Fenway Park. The pictures were used in advertisements and on billboards to promote various Jimmy Fund initiatives, and helped cement "Big Papi’s" status as the heir apparent to superstar sluggers like Ted Williams, Carl Yastrzemski, and Mo Vaughn who have devoted their time to New England’s favorite charity.

Through the years, Ortiz has continued to give back by visiting with Jimmy Fund Clinic kids during their annual trips to spring training and various MLB ballparks, and by making impassioned TV appearances during the WEEI/NESN Jimmy Fund Radio-Telethon each August.

Even his jersey has done its part. In 2007, when a tattered shirt bearing Ortiz’s name and famed No. 34 was found buried in two feet of concrete at the new Yankee Stadium — secretly buried there to "curse" the Yankees by a construction worker who happened to be a Red Sox fan — the jersey was auctioned off for $175,000 to benefit pediatric and adult cancer care and research at Dana-Farber.

In 2011 Ortiz received the prestigious Roberto Clemente Award, Major League Baseball’s highest honor for "those who best represent the game of baseball through their positive contributions on and off the field." His efforts on behalf of Dana-Farber and the Jimmy Fund are one example of what makes Big Papi stand out in a big way, both at the plate and everywhere else he goes.