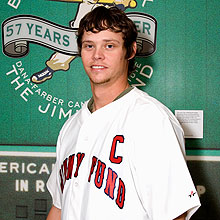 Clay Buchholz (along with Tim Wakefield) were officially announced as the first Jimmy Fund Co-Captains. In this role, the ambassadors raised awareness and helped build support for cancer care and research throughout Red Sox Nation.

While emerging as a leading Red Sox pitcher in recent years, Clay Buchholz has built a relationship with the Jimmy Fund as powerful as his fastball.

In November 2006, right after a season in which he was named Red Sox Minor League Pitcher of the Year, Buchholz was announced as a member of the New Stars for Young Stars team. The following January, he joined Boston stars Curt Schilling and Jonathan Papelbon, along with other minor leaguers for the annual event — where players meet and sign autographs for Jimmy Fund Clinic patients. That year, New Stars for Young Stars raised more than $30,000 to support cancer care and research at Dana-Farber.

Later that January, Buchholz joined a dozen other Red Sox rookies for a visit to the Jimmy Fund Clinic. The group signed photos and baseballs for young Sox fans receiving cancer treatment, many of whom were no doubt watching when Buchholz pitched a no-hitter on Sept. 1, 2007, at Baltimore in just his second major league start.

In February 2010, Buchholz was named the fifth honorary Rally for the Jimmy Fund Spokesplayer. He joined the ranks of past Red Sox spokesplayers Jon Lester, Trot Nixon, Dustin Pedroia, and Kevin Youkilis in encouraging Sox fans to create Rally teams to support the Jimmy Fund. The winning teams were allowed to wear Sox gear to work or school on April 6 and later got a visit from Buchholz.

That same April, Buchholz joined Red Sox pitcher Tim Wakefield as an inaugural Jimmy Fund Co-Captain. The teammates held the roles for the 2010 and 2011 seasons, building support for adult and pediatric cancer care and research at Dana-Farber and raising awareness of Jimmy Fund fundraising events and programs throughout Red Sox Nation.

"Being involved with the Jimmy Fund is an honor for any Red Sox player," Buchholz said upon being named a Co-Captain. "I feel extremely fortunate to be part of this tradition and will do what I can to support Dana-Farber's important mission."

For his efforts on behalf of the Jimmy Fund and other charities in 2010, along with his impressive 17-7 record, Buchholz won the BoSox Club Man of the Year Award for his contributions to the success of the Red Sox and his cooperation and efforts in community endeavors.