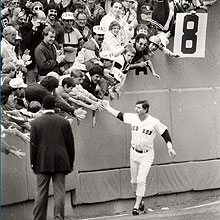 In his last game at Fenway for the Red Sox, Hall of Famer Carl Yastrzemski changed his jersey each inning, and then gave all 10 to the Jimmy Fund to auction off for Dana-Farber.

Red Sox Hall of Famer Carl Yastrzemski followed in Ted Williams' footsteps in more ways than one after the Splendid Splinter retired in 1960.

Not only did “Yaz” pick up where Williams left off in left field, becoming an American League MVP and Triple Crown winner in 1967, he also continued Williams' legacy of support for the Jimmy Fund.

It was Yaz who suggested that “Jimmy” receive a full share of the team's bonus earnings from appearing in the ‘67 World Series (about $5,500), as a way of honoring owner Tom Yawkey and his dedication to Dana-Farber. Yastrzemski’s teammates agreed unanimously, without discussion, even though this was close to a full year’s salary for many younger players on the club.

Yaz’s dedication did not waver over the years. He was named an honorary chairman of the Jimmy Fund and, in 1979, received the charity's highest honor, the Yawkey Award, in appreciation for more than a decade of service to the Jimmy Fund.

Even on his last weekend playing for the Red Sox, in October 1983, Yastrzemski showed his compassion and generosity for the charity in two big ways. First, he changed his uniform each inning during his final game, and donated all the No. 8 jerseys to Dana-Farber to auction off for “Jimmy.” That same weekend, during the “Yaz Day” farewell ceremonies, Yastrzemski requested that a child from the Jimmy Fund be included on the speaker's platform. “I wanted a small lineup of people up there who represent only what's most important to me,” said Yastrzemski.

In retirement Yastrzemski has continued to make appearances at numerous events on behalf of the Jimmy Fund, including golf tournaments and reunions of the 1967 “Impossible Dream” team he led all the way to the World Series.