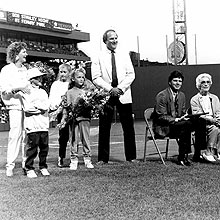 In 1990, with his family by his side, Bob Stanley was honored with the Thomas A. and Jean R. Yawkey Award for his dedication.

Bob Stanley, aka "The Steamer," gave generously of his time to the Jimmy Fund while an All-Star relief pitcher for the Red Sox — and then later saw that kindness come back to him when his own young son developed cancer.

Stanley made regular trips to the Jimmy Fund Clinic during his playing days. One of his visits in the late 1980s was with a 10-year-old patient who was deeply depressed and had stopped communicating with his friends and family. The Steamer came to the clinic with a bat, ball, and his team jersey, a special one that he had been wearing when he broke the Sox record for career saves. He signed the jersey for the boy, and then spent nearly two hours at the child's bedside.

Miraculously, the boy began talking again and kept speaking until his death several months later. The child was buried, as requested, wearing Stanley’s No. 46 jersey. "That experience was a dream come true," said the boy's mother later. "He had lived and breathed the Red Sox for as long as I could remember, and during his last weeks, it was a major part of what helped him through each day."

A few years later, Stanley discovered that his 9-year-old son, Kyle, had a cancerous tumor in his sinus cavity  — a condition similar to the one that impacted the boy Bob earlier befriended. Kyle endured chemotherapy, radiation, and surgeries at Dana-Farber and Boston Children's Hospital, and Stanley found himself walking familiar halls, this time as a father rather than a celebrity visitor.

In 1990 Bob Stanley and his wife, Joan, were given the Thomas A. and Jean R. Yawkey Award (now called the Boston Red Sox Jimmy Fund Award) — the Jimmy Fund's highest honor — for their commitment to the Jimmy Fund. Kyle Stanley recovered, and although he lost the sight in his right eye, he grew up, got married, and can still beat his dad on the golf course.

Bob Stanley may have finished one strike short of closing out a World Series championship for the Red Sox in 1986, but he still considers himself very blessed.