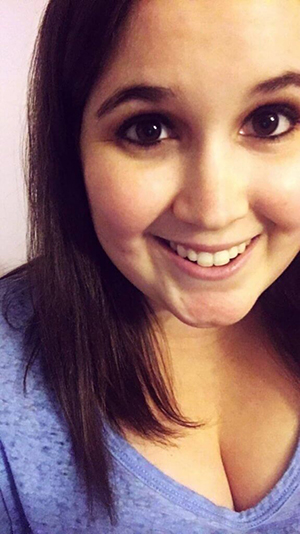 Kristina Johnson is a recent college graduate with a major in psychology who is working part-time while she looks for the right job. In her spare time, she likes spending time with friends and family and working out at the gym.

Her life may sound like that of an average 25-year-old, but in one important way, it is quite different: She is undergoing treatment for a very rare and aggressive brain tumor. Her response to the treatment—an experimental drug—has been “amazing,” according to her oncologist Patrick Wen, MD, director of the Center for Neuro-Oncology at Dana-Farber Cancer Institute. And while her response is not that of an average brain tumor patient, doctors say it represents a step forward for patients with this rare cancer.

"Until now, nothing has worked for this subset of patients because this cancer is notoriously difficult to treat," Wen says.

Tumors like Johnson’s are known as diffuse midline gliomas. They develop deep in the brain near nerve centers that control strength and sensation. Surgery is dangerous, and even if partially removed, the tumors tend to grow back.

Johnson, who lives in Burlington, Conn., underwent urgent surgery at a local hospital soon after her diagnosis in 2014. She developed two infections, adding an extra two months to her hospital stay. She was then transferred to another hospital, where she spent a month in rehabilitation therapy for impaired walking and aphasia, a language disorder that makes it difficult to express thoughts verbally. After returning home, Johnson continued to undergo intravenous antibiotic treatment.

In August 2015, surgeons operated again to remove more of the tumor, but despite the surgery and radiation treatment, it continued to grow.

In the spring of 2016, Johnson’s parents brought her to Dana-Farber, where Wen enrolled her in a trial of an experimental drug called ONC201. ONC201 is an oral drug that gets into the brain and has been shown in animal models to cause tumor cells to self-destruct, while avoiding harm to normal cells. Patients often tolerate the drug well, and don’t experience many side effects, according to Wen.

Johnson began taking ONC201 every three weeks starting in March 2016. By August, an MRI scan showed all that was left of her tumor was an area of scarring—technically a partial response, meaning the tumor shrunk but was not fully eliminated. Still, the response has proved durable so far.

Johnson is one of only a few patients with brain tumors to respond to ONC201, which is in early stage studies in several other types of cancers. Her exceptional response prompted researchers to analyze the genetic profile of her tumor. They found that it was driven by a DNA mutation known as H3K27M, which is often associated with diffuse midline gliomas. Based on this finding and another patient with the same mutation who also had a response to ONC201, the company has focused its clinical trials on patients whose tumors have the H3K27M mutation. However, it’s not yet known for certain whether the drug can only be effective in tumors carrying the mutation.

Meanwhile, Johnson continues to travel to Dana-Farber every three weeks to swallow her oral doses of ONC201. She says she has no side effects except occasionally feeling fatigued. All in all, "it’s letting me live my life the way I want to," she says.