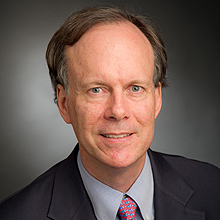 William G. Kaelin Jr., MD, professor in the Department of Medicine at Dana-Farber Cancer Institute and Harvard Medical School, has been named a winner of the 2016 Lasker Award for Basic Medical Research by the Albert and Mary Lasker Foundation. Kaelin, along with Peter J. Ratcliffe (University of Oxford/Francis Crick Institute), and Gregg L. Semenza (Johns Hopkins University School of Medicine) were cited for the discovery of the pathway by which cells from humans and most animals sense and adapt to changes in oxygen availability – a process essential for survival. The 2016 Lasker Awards, among the most prestigious biomedical awards in the world, carry an honorarium of $250,000 for each category and will be presented on Friday, September 23, in New York City.

"Bill Kaelin is an extraordinary researcher and highly deserving of this honor. His work at Dana-Farber has guided and inspired cancer researchers and caregivers all over the world in understanding the mysteries of cancer. His insights have furthered our quest for developing new treatments. It is wonderful to see his work recognized by the Lasker Foundation. He is a most worthy recipient of this esteemed honor," said Edward J. Benz, Jr., MD, president and CEO Dana-Farber Cancer Institute. Kaelin's research explores why mutations in genes known as tumor-suppressor genes can lead to cancer. His study of a tumor-suppressor gene called VHL provided key insights into the body's response to changes in oxygen levels. He discovered that VHL helps control the levels of a protein known as HIF, which ratchets up or down the response to low oxygen, such as the production of red blood cells and new blood vessels. His subsequent discovery of a molecular switch that renders HIF oxygen-sensitive was critical to the understanding of how cells react to variations in oxygen level.

"The work of this year's honorees epitomizes the power and impact of dedication to rigorous and innovative medical research. These outstanding advances have illuminated fundamental aspects of life, developed a cure for a deadly disease, and raised public engagement with science," said Claire Pomeroy, president of the Lasker Foundation. "The innovative and highly original achievements of these scientists highlight the critical importance of sustained support for biomedical research in attaining a healthier future for all."

"The 2016 Lasker winners combined exceptional insight, creativity, and perseverance in pursuing crucial questions in medical science," said Joseph L. Goldstein of the University of Texas Southwestern Medical Center and chair of the Lasker Medical Research Awards Jury. "This year's Basic Award laureates have deepened our understanding of the fundamental pathways by which we sense and respond to the presence of oxygen; the 2016 Clinical Award winners have provided an ingenious method to study the replication of the hepatitis C virus and developed a potent cure for the disease; and the Special Achievement award laureate has tirelessly promoted science education as a means for improving human welfare and exemplified the best in research excellence and scientific statesmanship."

For 71 years, the Lasker Awards, America's most prestigious biomedical research awards, have recognized the contributions of scientists, clinicians, and public citizens who have made major advances in the understanding, diagnosis, treatment, cure, or prevention of human disease. Recipients of the Lasker Medical Research Awards are selected by a distinguished international jury chaired by Joseph L. Goldstein, recipient of the 1985 Lasker Award for Basic Medical Research and the Nobel Prize in Physiology or Medicine. Eighty-seven Lasker laureates have received the Nobel Prize, including 41 in the last three decades. More details on the Lasker Award recipients, the full citations for each award category, video interviews and photos of the awardees, and additional information on the Foundation are available at www.laskerfoundation.org.