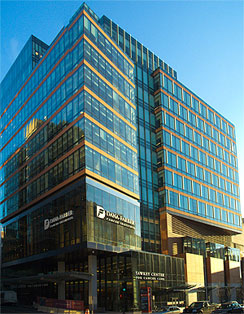 Research led by Dana-Farber scientists showed a new drug combination lengthened the lives of patients with metastatic colorectal cancer, all of whom had exhausted available standard treatments.

Investigators at Dana-Farber and research centers around the world found that the drug combination – given as a single pill known as TAS-102 – not only extended patients’ overall survival, but also delayed the advance of the disease and did so with very few side effects. TAS-102 was approved by the Food and Drug Administration in September.

"Colorectal cancer is the second most common cause of cancer deaths [after lung cancer] in the United States and is an enormous health problem around the world," said the study’s lead author, Robert J. Mayer, MD, faculty vice president for academic affairs and colorectal cancer researcher at Dana-Farber. "To have a well-tolerated, effective new drug in a cancer that is so prevalent is good news for patients."

Research by Dana-Farber scientists showed that adding the experimental drug midostaurin to standard chemotherapy improves survival of a high-risk, genetically defined subgroup of patients with acute myeloid leukemia (AML). This is the first targeted treatment to show such positive results.

The AML subgroup included patients ages 18 to 60 – considered "young adults" – whose cancer cells carried mutations in the FLT-3 gene. The mutated gene drives aggressive growth, so that such patients have a poor prognosis and a high chance of relapse. Treatment with chemotherapy is directed at achieving a remission so that patients can undergo stem cell transplant.

“We were pleased to learn that patients who had midostaurin added to their therapy survived more commonly and longer than those who received placebo,” said Richard M. Stone, MD, director of the Adult Leukemia Program at Dana-Farber.

David Reardon, MD, clinical director of the Center for Neuro-Oncology at Dana-Farber, led a study showing that patients with the deadliest form of brain cancer survived longer when an experimental vaccine that enlists the immune system to fight cancer was added to standard therapy.

"We are observing an extremely rare overall survival advantage that is now translating into long-term survival for a number of patients," said Reardon.

Patients with metastatic, HER2-positive breast cancer who received a combination antibody/chemotherapy drug in a phase 3 clinical trial survived longer, on average, than patients receiving other treatments according to a study by researchers from Dana-Farber.

"This is an important trial because it demonstrates that even in patients whose cancer has progressed on multiple other HER2-targeted therapies, treatment with T-DM1 substantially extends patient survival compared to other drugs,” said the study’s senior author, Ian Krop, MD, PhD, Senior Physician in the Susan F. Smith Center for Women’s Cancers at Dana-Farber. "In addition, T-DM1 causes fewer serious side effects than other treatments. Based on this study and others, T-DM1 should be considered the standard of care for patients whose cancer has progressed on a HER2-targeted treatment."

A study led by Pasi Jänne, MD, PhD, director of the Lowe Center for Thoracic Oncology at Dana-Farber, found that an experimental drug targeted to a resistance mutation is highly active in patients with EGFR-positive non-small cell lung cancer (NSCLC) when the disease progressed during treatment with front-line inhibitor drugs. Those drugs include gefitinib (Iressa), erlotinib (Tarceva), and afatinib (Gilotrif).

Results of the phase 1 study showed that the drug, AZD9291, caused tumor shrinkage in 61 percent of the 127 patients whose cancer contained the mutation EGFRT790-M – the genetic change that enables the lung cancers to evade the EGFR kinase inhibitors.

“Previously, if a patient became resistant to kinase inhibitors like Tarceva, they were treated with chemotherapy," said Jänne. “Now there is this option, and the beautiful part is they don’t have the side effects of Tarceva – this drug is better tolerated." AZD9291 received FDA approval in November.