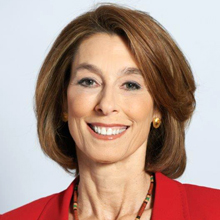 Laurie H. Glimcher, MD, an internationally recognized immunologist, has been named the next president and CEO of Dana-Farber Cancer Institute, the Board of Trustees announced today. Glimcher is currently the Stephen and Suzanne Weiss Dean of the Medical College at Weill Cornell Medicine in New York City, where she is also professor of medicine and provost for medical affairs at Cornell University.

"Dr. Glimcher is in many ways an ideal choice for Dana-Farber," said Josh Bekenstein, chairman of the Dana-Farber Board of Trustees. "She is a distinguished immunologist, widely renowned for her work in one of the most promising areas of cancer research. She has had extraordinary success as the leader of a major academic medical institution. Most importantly, she has a deep understanding of the latest developments in cancer research and care, and a clear vision of how Dana-Farber can most powerfully affect the fight against cancer."

Glimcher will begin at Dana-Farber in January, and current President Edward J. Benz, Jr., MD, has agreed to remain as president until her arrival at the Institute. She will also be a professor of medicine at Harvard Medical School.

"It is an enormous honor and privilege to be chosen as the next leader of Dana-Farber Cancer Institute," said Glimcher. "The opportunity to advance Dana-Farber's groundbreaking research and to improve the care available to patients with cancer is truly special to me, and I am thrilled to be returning home to Boston. Cancer research and care have reached a transformative moment in science, and I look forward to working with all of Dana-Farber's clinicians and scientists to find innovative therapies in the coming years."

Glimcher has strong ties to the Harvard medical community. Prior to joining Weill Cornell Medicine, Glimcher was the Irene Heinz Given Professor of Immunology at the Harvard School of Public Health, and Professor of Medicine at Harvard Medical School, where she headed one of the top immunology programs in the world. She is widely considered to be one of the world leaders in understanding cellular differentiation pathways in lymphocytes and has made seminal discoveries of key transcription factors that drive lineage commitment and activation in the immune system. Most recently she has discovered a critical signaling pathway in both tumor cells and host immune responses, translating her basic discoveries in the control of immune cell differentiation into a new approach to cancer immunotherapy.

Glimcher received her postdoctoral training at Harvard and in the Laboratory of Immunology at the National Institute of Allergy and Infectious Diseases in Bethesda, Maryland, and is board certified in Internal Medicine and Rheumatology. She received her BA degree from Radcliffe College and her MD from Harvard Medical School.

She is a member of the American Asthma Foundation and Cancer Research Institute Scientific Advisory Boards and served on the Burroughs-Wellcome Fund and HHMI Scientific Advisory Boards. She sits on the Board of Trustees of Memorial Sloan Kettering Cancer Center and is on the Corporate Board of Directors of the Bristol-Myers Squibb Pharmaceutical Corporation and the Waters Corporation.
Sign up for updates ›