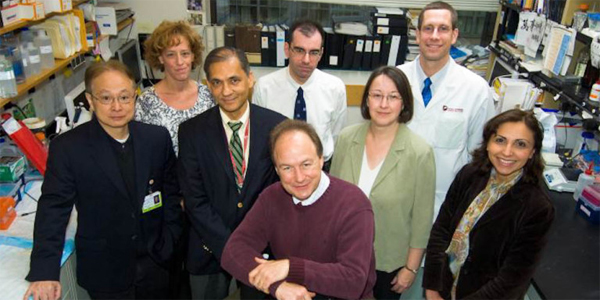 Patients and Dana-Farber researchers alike welcomed this week’s Food and Drug Administration (FDA) approval of a new drug for a potentially fatal side effect of stem cell transplants.

The approval means patients can receive the drug, defibrotide, as standard therapy for hepatic veno-occlusive disease (VOD) of the liver, a dangerous condition that sometimes follows transplantation of blood-forming stem cells from a donor or patients themselves. For a group of Dana-Farber investigators, it validates years of effort to develop and test a drug that could radically improve the prospects of patients with VOD.

VOD, which involves blockage of small veins in the liver, can be caused by the high doses of chemotherapy used in stem cell transplants, plus allergic responses to the donor cells. The disease, also known as sinusoidal obstruction syndrome (SOS), occurs in a range of transplant patients, with rates varying between 5 to 60 percent depending on their age, transplant characteristics, and overall health, with a relatively higher frequency in children. Without treatment, more than 80 percent of patients with severe VOD who develop multi-organ failure die of it. Treatment with defibrotide, the first drug shown to be effective against VOD, can cut that rate in half and appears to be even more effective if used to prevent the disease or treat it at an early stage. It also seems especially effective in children.

“VOD/SOS of the liver has been one of the most feared complications of high-dose chemotherapy and stem cell transplantation,” says Paul Richardson, MD, clinical program leader and director of clinical research at the Dana-Farber/Brigham and Women’s Cancer Center Jerome Lipper Center for Multiple Myeloma, who spearheaded the testing of defibrotide in transplant patients and led it to FDA approval. “For years, there was little we could do for people who developed the severe form of the disease.”

Fifteen years ago, Richardson made it his mission to find a viable treatment for hepatic VOD, after one of his patients died of the disease and from bleeding complications of a drug called t-PA, which is used to try to reverse VOD (t-PA has since been abandoned because of the risk of complications.) An exhaustive study of medical literature and a series of meetings led him to defibrotide, a little-known, naturally-derived agent developed a few years earlier by Italian scientists asa possible treatment for clogged blood vessels.

Physicians knew that high-dose chemotherapy can cause VOD by damaging narrow blood vessels in the liver, obstructing blood flow and leading to problems such as jaundice, a painfully enlarged liver, and fluid retention, resulting in kidney and pulmonary dysfunction. Defibrotide binds to the blood vessel lining and helps repair damage there, reversing some of the blockage and vascular injury without causing systemic bleeding. Richardson thought it had promise as a treatment for VOD.

“The first-ever patient treated with defibrotide had a very severe case of VOD/SOS,” Richardson recounts. “She was 28 years old at the time and had undergone an autologous stem cell transplant for relapsed Hodgkin lymphoma with the intent to cure her disease. Unfortunately, her treatment was complicated by the emergence of severe VOD/SOS within 10 days of her transplant. Because defibrotide hadn’t been used for VOD/SOS before, we didn’t know how long she should be treated to ensure success, so we empirically administered the drug for 12 days, which she tolerated well and responded nicely to. We completed the therapy as called for in the treatment protocol, but then we saw the VOD/SOS re-emerge. We re-treated her promptly, as permitted by the protocol, and she made a full recovery, despite having severe multi-organ failure caused by her VOD/SOS and a bilirubin level at one point over 40 times the upper limit of normal. Her improvement showed in front of our eyes the potential of this drug mechanism against this otherwise almost universally lethal syndrome. Subsequent positive results using the same treatment protocol in other patients, including children, strongly supported this view.” Bilirubin, a substance produced by the normal breakdown of red blood cells in the liver, is elevated in liver failure and typically increases in VOD occurring after stem cell transplant.

Thus began a years-long series of preclinical studies and clinical trials – most of them led by Richardson and his co-investigators at Dana-Farber and in Europe – to gauge the effectiveness of defibrotide and to see whether the drug triggered bleeding or interfered with the beneficial effects of chemotherapy. Happily, it proved both effective and safe and had additional, unexpected benefits such as reducing rates of graft-versus-host disease in patients, and making chemotherapy more effective in pre-clinical models.