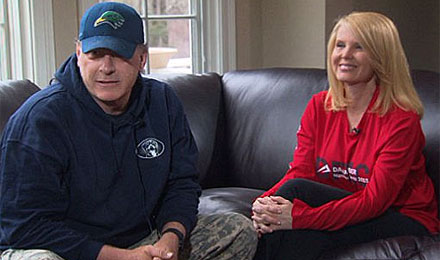 Shonda Schilling- wife of World Series Champion Boston Red Sox retired pitcher Curt Schilling – is running the Boston Marathon on April 20 on the Dana-Farber team to give back to the Institute that treated her husband for cancer last year.

“We were beyond blessed to be treated by Dana-Farber doctors and staff,” said Shonda, who is also a cancer survivor. "How can you ever repay those people for helping you through those dark days? You celebrate them. So I dusted my sneakers off and I will be running the 2015 Boston Marathon."

Shonda, of Medfield, ran the Boston Marathon almost ten years ago and wanted to return to the event this year to raise funds for Dana-Farber as part of the Dana-Farber Marathon Challenge (DFMC). She is one of more than 550 runners on the team who will run the 119th Boston Marathon with a goal of raising $5.2 million for the Claudia Adams Barr Program in Innovative Basic Cancer Research at Dana-Farber.

Curt Schilling was treated at Dana-Farber after he was diagnosed in February 2014 with squamous cell carcinoma, mouth cancer. Schilling has said he believes years of chewing tobacco caused his cancer.

"It was hard to see someone bigger than life being kicked around by cancer,” said Shonda. "He fought everyday and some days were definitely harder than others. He was lucky that as miserable and awful as he felt, there would be better days ahead."

"Short of being carried off the course, I will finish knowing that the money I raise will go to help the next family celebrate a year later like us," she said.