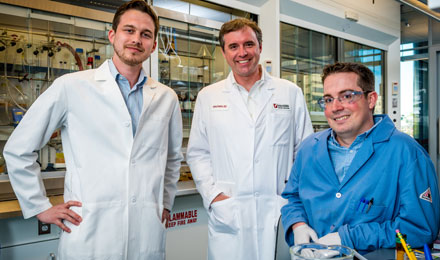 In work that heralds a new, more potent form of targeted therapy for cancer, Dana-Farber Cancer Institute scientists have devised a chemical technology that doesn’t just disable malevolent proteins in tumor cells, as current agents do, but destroys them.

As described in a study posted online May 21, 2015, by Science Express, the strategy uses tumor cells’ own protein-chopping machinery to break down and dispose of proteins that drive cancer growth. When tested in laboratory samples of leukemia cells and in animals with human-like leukemia, the approach caused cancer cells to die much more quickly than with conventional targeted therapies.

Researchers developed the strategy as a way to develop inhibitors of “undruggable” proteins and overcome drug resistance, a common shortcoming of targeted therapies. Resistance arises when tumors that originally responded to a particular therapy manage to circumvent the drug’s effects and resume their growth.

“One of the reasons resistance occurs is that cancer-related proteins often have multiple functions within the cell, and conventional targeted therapies inhibit just one or a few of those functions,” said the paper’s senior author, James Bradner, MD, an oncologist and chemist at Dana-Farber. “Conventional drugs allow the targeted protein to adapt to the drug, and the cell finds alternate routes for its growth signals.

“We began designing approaches that cause the target protein to disintegrate, rather than merely be inhibited,” he continued. “It would be very powerful if we could chemically convert an inhibitor drug into a degrader drug.”

Doing so would involve manipulating the cell’s natural protein-elimination system. Used-up or unneeded proteins are tagged for disposal by enzymes that attach a protein called ubiquitin to them. The marked proteins are then brought to a structure called the proteasome, where they’re ground up and recycled. Three enzymes — dubbed E1, E2, and E3 — collaborate to affix the tags.

To harness this system for the destruction of cancer proteins, Bradner’s team designed a chemical adapter that attaches to a targeted drug molecule. The adapter works like a tiny trailer hitch, enabling the drug to tow the cell’s protein-degradation machinery directly to the protein of interest. Once bound to that protein, the combination drug-and-protein-degrader essentially demolish it.

The team tested the technology — which they dubbed “degronimids” — in laboratory samples of leukemia cells. They began with the drug JQ1, which inhibits BRD4, a protein that orchestrates the expression of cancer growth genes. They built an adapter out of phthalimide — a chemical derivative of the drug thalidomide — and attached it to JQ1. The phthalimide was designed to bind snugly to a protein-degrading enzyme E3 (called Cereblon), making it ideal as a trailer hitch.

When investigators treated the leukemia cells with a JQ1-and-phthalimide “conjugate” called dBET1, the BRD4 protein within the cells was degraded in less than an hour. Such rapid and extensive degradation suggests that conjugates may be able to prevent or hinder cancer cells from developing resistance to targeted therapies, the researchers state.

“The potency, selectivity, and rapidity of this approach — namely the ability to home in specifically on BRD4 — are unprecedented in clinical approaches to protein degradation,” Bradner said.

To determine how selective dBET1 actually is, the researchers measured the levels of all proteins in leukemia cells one and two hours after treatment. “We were stunned to find that only three proteins of more than 7,000 in the entire cell were degraded: BRD2, 3, and 4, — an exceptional degree of selectivity guided by the intended targets of JQ1,” Bradner said. “It’s as though dBET1 is laser-guided to deliver protein-degrading machinery to targeted proteins.”

The investigators then tested dBET1 in mice bearing a widespread and aggressive form of human leukemia. As in the laboratory cell samples, there was a rapid degradation of BRD4 in the tumor cells and a powerful anti-leukemia effect, with few noticeable side effects.

To see if compounds other than JQ1 can be used as a guidance system for a conjugate, the researchers created a set of molecules that lock the protein-degradation machinery onto a compound called SLF, which targets a protein called FKBP12. When they treated cancer cells with SLF, they found it degraded the vast majority of FKBP12 in the cells within a few hours.

Buoyed by these results, Dana-Farber researchers are working to create a derivative of dBET1 that can be used as a drug in human patients — and to extend the conjugate strategy for the treatment of other cancers and other genetically-caused diseases.

“We’re very excited that this chemical technology may offer a way to improve many cancer drug molecules, and of course this strategy has implications beyond cancer for the treatment of other life-threatening diseases,” Bradner said.

“The dBET1 and the dFKBP12 compounds are presently in a late stage of lead optimization for therapeutic development in both cancer and non-malignant diseases,” says Prem Das, PhD, chief research business development officer at Dana-Farber. “Composition-of-matter and method-of-use patent applications have been filed on these and other additional targeted agents, as well as on the chemistry platform. They will be licensed for commercialization to an appropriate company according to standard Dana-Farber practice.” Potential partners or investors can contact Das at the Robert and Renée Belfer Office for Dana-Farber Innovations.