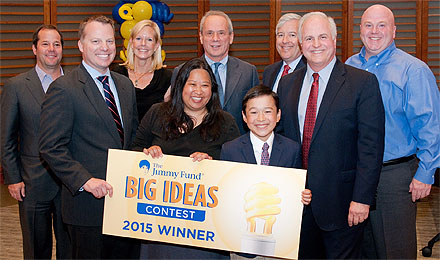 A social media campaign focusing on sharing jokes and pledging money to the Jimmy Fund is the grand prize winner of the Jimmy Fund Big Ideas Contest. “Jimmy Fund Jokers: Laughter is the Best Medicine,” is the idea submitted by the Surprenant Family of Needham, MA, and was chosen from more than 200 entries from 19 states. The Surprenant Family was one of five finalists who presented their ideas before an esteemed panel of national business leaders on June 10.

Joy Olaes Surprenant and Michael Surprenant, along with their son, Maxwell, 11, proposed a social media campaign where adults and kids share jokes on Facebook, pledge $10 or more to the Jimmy Fund, and tag their friends to spread the message and increase the fundraising. The Surprenants’ Big Idea also incorporated comedy nights, celebrity involvement, and various fundraising events related to the campaign.

As the grand prize winner, the Surprenant Family receives prizes and recognition including: throwing out the first pitch at a Boston Red Sox game and tickets in a corporate box; field access during pre-game warm-ups and tickets to a New England Patriots game; an Apple iPad Air from BJ’s Wholesale Club; free Friendly’s ice cream for one year; a WCVB-TV/Channel 5 studio tour; $500 Stop & Shop gift card; and lunch with one of the Jimmy Fund Big Ideas Contest judges and Dana-Farber’s President and CEO, Edward J. Benz Jr., MD.

“We continue to be impressed and honored by the 'Big Ideas' that people share with us, all of which will benefit cancer care and research at Dana-Farber,” said Susan S. Paresky, senior vice president for development at Dana-Farber Cancer Institute and the Jimmy Fund. "The Contest continues to grow in popularity and we are seeing more creative and innovative submissions. We look forward to implementing the Surprenant Family’s idea and working closely with the other finalists to determine if we can utilize their ideas as well."

The Jimmy Fund Big Ideas Contest was first held in 2013 and drew more than 150 entrees from 10 different states. Several finalist ideas were implemented, including Cheer for Dana-FarberSM, a program where cheerleading squads from across the region compete to raise money for Dana-Farber and the Jimmy Fund. The squads that raise the most money are entered into a drawing for a chance to perform at a New England Patriots game. Over the past two years, this event has raised more than $155,000 and continues to grow.

The other four finalists were:

Boston Sports Team “The Apprentice,” one player from each of the five local professional sports teams would serve as the captain of teams of 6 to 10 random fans who create competing fundraisers, submitted by John Jacobbe, Jr., Clarksburg, MA.

Cancer Crush, a mobile app that would be developed using a model similar to the popular Candy Crush game, submitted by Geoffrey Lennon, Medford, MA.

The Jimmy Fund Supper Bowl,a multi-course dinner where each course is hosted by one local athlete/entertainer/celebrity, submitted by Paige Arnof-Fenn, Cambridge, MA.

“My family and I were so pleased and honored to be selected as one of the finalists and to have the opportunity to present to the amazing panel of judges,” said Maxwell Surprenant. “Our inspiration behind the idea was to help raise money for the Jimmy Fund and share some jokes - we are pretty confident that Jimmy Fund Jokers will do just that!”

The fundraising criteria for contest submissions stipulated that each idea raise approximately $100,000 or more for the Jimmy Fund and be sustainable each year thereafter. Individuals or teams of up to four people were permitted to enter the contest. Dana-Farber and Jimmy Fund employees were allowed to enter the contest, but were not eligible for prizes